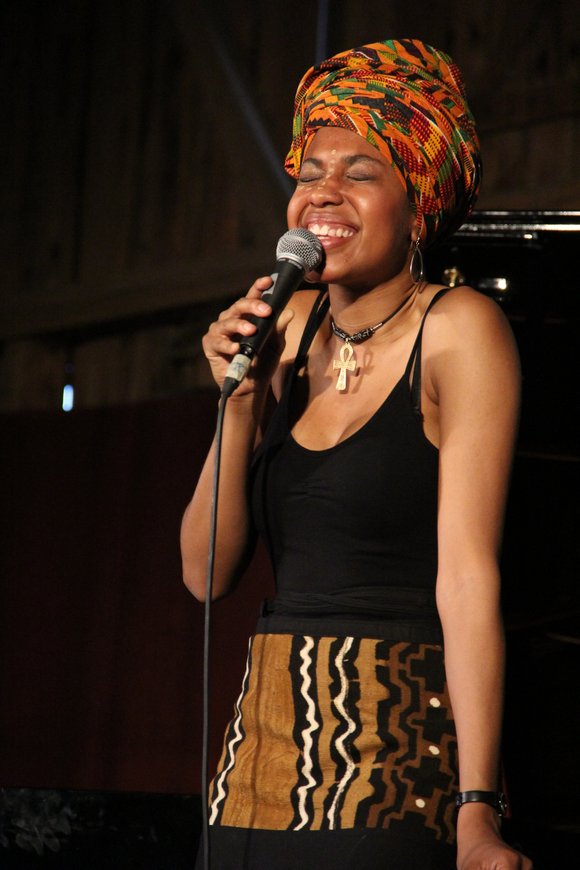 The vocalist Tulivu-Donna Cumberbatch, whose singing ability offers her the inventiveness to journey through the windows of blues, soul and jazz, has caught the attention of audiences from Brooklyn to Europe.

Tulivu, which is her Swahili name, means “beautiful.” She says her early influences were Gloria Lynn, Aretha Franklin and Carmen McRae.

Charlie Parker had an indescribable sound. The gods said it was undeniable as they sat watching him from the heavens for hours and hours. His speedy tempos and innovative harmonies were dazzling to the senses and frustrating to musicians attempting to perfect his style.

Parker (Aug. 2, 1920-March 12, 1955) became an architect of bebop, with his precipitous chord substitutions and raging harmonic concepts. His version of “If I Should Lose You” is so beautiful, joyful tears automatically flow.

Although most of Parker’s music screams blues, the epitome of the blues is heard on Billie Holiday and Parker’s recorded versions of “Lover Man.” The versions of “April in Paris” by Parker (with strings) and Count Basie’s big band are addictive.

The Kansas City native was such an influential force, his nickname, “Bird,” was the inspiration for the Manhattan jazz club Birdland (on Broadway) in 1949, where he opened with his drummer Roy Haynes.

Today his legacy continues with the annual free SummerStage Charlie Parker Jazz Festival weekend beginning Aug. 26 with the pianist/composer Jason Lindner and his Breeding Ground project, along with DJ Greg Caz. Lindner is a musical voyager constantly looking to expand the parameters of jazz. He participated on the late David Bowie’s final album “Blackstar.”

He performs in Harlem (where Parker once lived) at Marcus Garvey Park (124th Street and Marcus Park West), 7 p.m.-9 p.m. At the same site on Aug. 27 (3 p.m.-7 p.m.) an eclectic afternoon of jazz musicians will feature the NEA Jazz Master pianist and composer Randy Weston and his African Rhythms Sextet.

The jazz guru, who continues to celebrate his 90th birthday (April 6) will offer the cultural and historical aspects of Africa’s roots encompassed in the straight-ahead traditional movement. Charles Turner III, the jazz vocalist from California, is also featured. Cory Henry & The Funk Apostles make a habit of inducing a strong dose of funk, leaping jazz melodies and a taste of fusion.

Henry is a multi-instrumentalist, composer and arranger who favors the organ. He spent a three-year stint with the alto saxophonist Kenny Garrett. He has put in time on the NBC-TV’s “Jimmy Fallon Show” with the Roots and the gospel singer Yolanda Adams.

The young Texas native, vocalist Jazzmeia Horn is a reconstructionist who tailors standards such as “Lush Life,” or “Bye Bye Blackbird” into her own fashionable fit. Her repertoire runs the gamut from Stevie Wonder to Sarah Vaughan and Thelonious Monk’s “Evidence.”

On Aug. 28, the festival relocates downtown to Manhattan’s East Village (where Parker also lived) to Tompkins Square Park (East 7th Street and Avenue A) from 3 p.m. to 7 p.m.).

Afternoon guests will include the trio of pianist/composer Jason Moran, bassist Dave Holland and drummer Jack DeJohnette—all are definitive contributors to the jazz movement. The last two are alumni of Miles Davis’ ground-breaking fusion band. Allan Harris has made a big mark in a small sea of noted jazz vocalists.

The native West Coast tenor saxophonist, Donny McCaslin, and his band collaborated with David Bowie on his final album “Blackstar.” Some tunes will come from his latest album, “Beyond Now” (Motema Music). The alto saxophonist and singer Grace Kelly is a member of Jon Batiste’s Stay Human house band for “The Late Show with Stephen Colbert.”

The festival’s musicians represent the ever evolving jazz canvas that is a tribute to Parker’s revolutionary concepts. However, one wonders why Kelly is the only alto sax headliner. Where are all the alto players? No one called the renowned Charles McPherson (in the film “Bird” he played some of the parts not taken from Parker recordings).

Jimmy Heath was referred to as “little Bird” before he switched from alto to tenor sax, and there is Henry Threadgill, Rene McLean, Sonny Fortune, Jaleel Shaw and Darius Jones.

The Charlie Parker Jazz Festival should have at least one day of saxophonists, particularly alto players, giving their own perspectives of the legend.

The composer/trombonist Craig S. Harris recently presented his “TriHarLenium 2016: A Sound Portrait of Harlem 1976-2006 and the Next Decade” at Harlem’s Mist to a packed house.

Harris noted, “TriHarLenium 2016” is a work-in-progress in which he wanted to honor and preserve the legacy of Harlem from 1976 to 2006.

As a resident of Harlem for more than 20 years, he integrated the sounds of Harlem from the crack heads and drug dealers to music flowing from the juke boxed bars that lined the blocks of Lenox and Seventh avenues.

The movements entitled “On My Mind,” “Blues People” and Magic Tragic” reflected how Harlem has been able to change and yet somehow remain intact.

The vocalists embellished Harlem’s meaning of that hip soul, brothers looking cooler than killer joe. Sisters looking so fine, brothers yelled, “Can I go.” The band’s unharnessed soul forced some to jump up and dance, it was that Harlem street groove that holds on tight. The drums were blazing, vocalists scatting, the keyboards were on a crazy blues flight and the crowd was about to lose their shoes from so much foot-pattin’.

“I am so inspired walking through Harlem from the east side to the west side,” said Harris. “Hearing different conversations, the buses, sirens, seeing different store fronts and new businesses, it’s a real story.”

The new work will reflect the intensifying pressures for change on the community, from gentrification to racial and economic change.