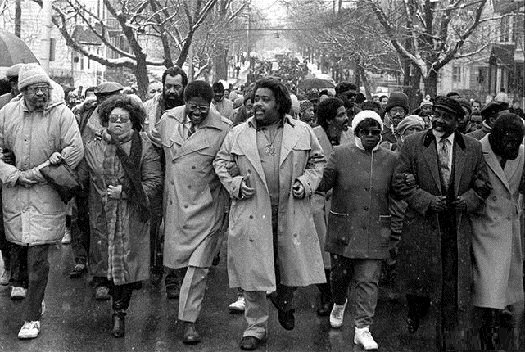 Rev. Al Sharpton and demonstrators in Crown Heights in 1991

Aug. 19, 1991, is the day that a 7-year-old Black child, Gavin Cato, lost his life because a car driven by Yosef Lifsh slammed him into a wall, also injuring his 7-year-old cousin, Angela Cato. Three days after this tragic incident Blacks and Jews continued their fighting at Utica Avenue and President Street and on Eastern Parkway in front of the headquarters of the Orthodox Jewish Lubaviter community.

Lisch was driving the third car in the procession escorting Jewish Grand Rebbe Menachem Schneerson. The irony to all of this is that there was an NYPD patrol car at the head of the procession because the NYPD reportedly considered the Grand Rebbe as some sort of Pope-like figure for Jewish people.

As the story unfolds, a Jewish ambulance crew placed an unhurt Lisch into their vehicle, leaving the two Cato children lying on the ground, and that was the spark that set it all off. Of course the mainstream media called Black folks rioters, blaming the city’s first Black mayor, David Dinkins, for what ensued: two dead, 200 civilians and police officers injured.

And of course, former mayor Ed Koch, smarting from his primary loss to Dinkins, called it a pogrom, which by definition is an organized massacre of a particular ethnic group. The only Jewish death, according to reports, was a student from Australia, Yankel Rosenbaum. A young Black man, Lemerick Nelson, was finally charged with violating Rosenbaum’s civil rights. However, Lisch was not charged with anything as the Grand Jury under DA Charles Hynes voted not to indict.

Richard Green, executive director of the Crown Heights Youth Collective, told the AmNews, “I have seen 25 years of progress and of course I cannot speak for all of the population of Crown Heights, but there is a better relationship between Blacks and Jews; we are continuing to improve on that front.”

Dr. Rudy Crew, president of Medgar Evers College, explained that he has been present on the college’s float for the past three years and has seen Jewish people celebrating with Black people during the annual West Indian Day Parade on Eastern Parkway, an example of improved relations.

There are several Kumbayah events planned for this weekend, but the real story in Crown Heights is the continuing gentrification that is displacing Blacks and low-income residents. One housing activist told the AmNews that Crown Heights is “ground zero” for community displacement; the core issue fueling it is market pressure.

The Wall Street Journal reported in February 2016: “Gentrification has taken hold of northwestern stretches along Franklin Ave. and according to census data, 2000 to 2010, the number of non-Hispanic whites doubled by 16 percent while the Black population fell by 13 percent.”

The two square miles that make up the community of Crown Heights are still home to a majority of Blacks, both American-born and immigrants from Caribbean nations, but they find themselves in a daily fight against greedy landlords. Data from MNS Real Impact Real Estate showed that home prices rose in Crown Heights by 45 percent beginning in 2013. The NY Times Real Estate section reported that the cost of a condo ranged from $350,000 for a one-bedroom to $550,000-$800,000 for a three-bedroom. Rentals rose to $1,250-$1,350 a month for studio apartments and $2,600-$3,250 for two and three-bedroom apartments.

The 2013 census data shows that the median household income for Crown Heights is $39,215. Twenty-four percent of the residents are single mothers, while the poverty level is at 29.5 percent.

Housing advocates such as the Crown Heights Tenant’s Union are fighting back as evidenced by their march on Aug. 13 against the landlords who are forcing residents out. Unfortunately, attempts to reach the organization by press time proved futile.

Green said that his organization is helping people facing eviction by tapping into a pool of $13 million that the de Blasio administration is providing. “Housing has been one of the main issues, along with unemployment, that plagues life in Crown Heights,” stated Green.

Crew believes that the college must take a more active role in improving the quality of life for Blacks in Crown Heights. “Medgar Evers can become a pillar of strength for the community,” he said.