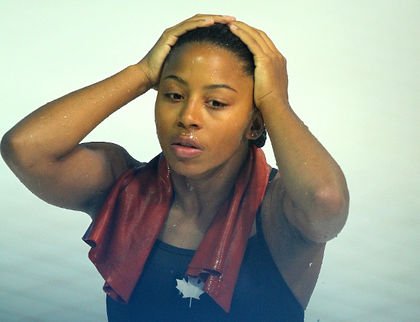 Somewhere in the United States, Canada and countries thousands of miles from North America, a young girl watched Jennifer Abel, the sensational 24-year-old diver from Montreal, seemingly defy long-held laws of physics, powerfully, yet with the grace of a ballerina, tightly contort her body, rapidly twisting head over feet before causing barely a ripple as she entered the water at the Maria Lenks Aquatic Center in Rio.

Although Abel finished a dubious fourth, one spot out of a medal in the 3-meter diving competition, and she didn’t have the designation “first Black or African-American to …,” as have several of her fellow Olympians, her performance most assuredly has inspired girls of color years younger, who up until now barely knew the sport existed, to pursue the discipline and optimistically imagine becoming an Olympic champion.

Such is the wonder of the Summer Games, which only take place once every four years, yet viscerally and tangibly effect so many. The number of young girls 19-year-old Simone Biles has captivated and given hope to can’t be definitively determined, but it’s probably thousands. Her unlikely journey from foster-care child in Ohio to the greatest woman gymnast ever reinforces the ethos of the American Dream.

So does the achievement of Daryl Homer, a product of Gun Hill Road in the Bronx, who in Rio became the first man representing the United States to win an Olympic medal in individual sabre since the pioneering Peter Westbrook took bronze at the Los Angeles Olympics in 1984.

Like so many of the great U.S. fencers, the 26-year-old Homer, who was born in the Virgin Islands and moved with his family to the Bronx at age 5, is an alumnus of the unparalleled Peter Westbrook Foundation based in Manhattan. Ironically, Homer’s introduction to fencing was by reading a children’s dictionary during his middle school years and coming across the word with an illustration of a fencer. Highly intrigued by the visual, the St. John’s University graduate determined he was going to engage in the sport.

Then there is Simone Manuel, the effervescent 20-year-old from Texas, whose emotional response after becoming the first Black woman to win an Olympic gold medal in swimming after her first-place finish in the 100-meter freestyle, unabashedly crying, will be captured in time.

“I hope that I can be an inspiration to others, so this medal is for the people who come behind me and get into the sport and hopefully find love and drive to get to this point,” Manuel said.

Manuel’s words ring profound. Diving, gymnastics, fencing and swimming are sports in which Black men and women, boys and girls, have minimal representation. Perhaps these Olympics will be the impetus for an increase in the numbers of those who realize desire, talent, hope and success transcends ethnicity and race.