The battle to save Langston Hughes' $3 million home 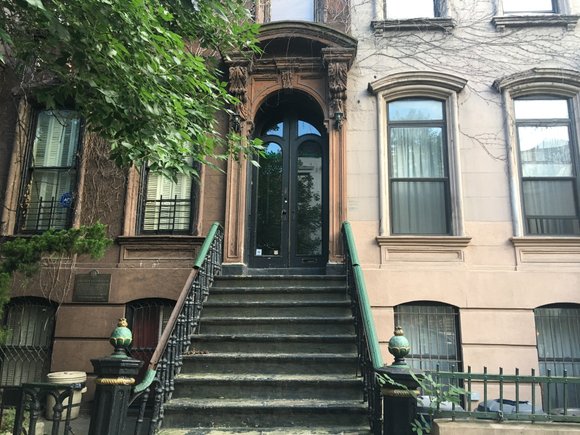 Pressure to sell one of America's great writers' Langston Hughes house is escalating. The current owner listed it for a mere $1 million a few years ago, but it didn't sell. For now, the home sits empty. The owner doesn't live there. No one does. Paint is chipping off the front steps. Heather Long/CNN

NEW YORK (CNNMoney) -- Ivy still grows on the front of Langston Hughes' home in Harlem. There aren't many houses like it left in New York City. Real estate agents estimate it's worth over $3 million.

And that's before anyone talks about the fact that one of America's great writers -- a hero of the Harlem Renaissance -- lived there for much of the 1950s and 60s, until he passed away. His typerwriter is still on a shelf.

Pressure to sell "Hughes House" is escalating. The current owner listed it for a mere $1 million a few years ago, but it didn't sell. For now, the home sits empty. The owner doesn't live there. No one does. Paint is chipping off the front steps.

Renee Watson thinks it's a tragedy. That's why she started an Indiegogo campaign to raise $150,000 to rent the home and turn it into a cultural center honoring Hughes.

"The more Harlem changes, the more I'm motivated to do something," says Watson, a writer who lives nearby, and has watched gentrification flood in. A Whole Foods is set to open in the area early next year. Realtors predict prices will skyrocket even further.

So far, the initiative to save Hughes House has raised just over $25,000.

'Nothing is sacred' in New York City

Watson remembers memorizing Hughes' poem "I, too, sing America" in 3rd grade in Portland, Oregon. As a young black artist, she felt that Hughes was holding up a mirror to her soul.

Just over a decade ago, Watson moved to New York City. One of her first pilgrimages was to East Harlem to find Hughes' house at 20 E. 127th Street. She was shocked to find it eerily quiet. There was no museum, no cultural center, just a small plaque that's hard to read from the sidewalk.

When the New York Times dubbed East Harlem the last "good deal" in Manhattan earlier this year, Watson knew she had to act. She reached out to the owner and pleaded.

"If someone made [the owner] an offer, she would definitely sell it, but like me, she doesn't want it to become condos or a coffee shop," says Watson. (The owner declined to speak with CNNMoney. Real estate records show she has held the deed to the home since 1999).

Watson sent out the "bat signal" to other authors in her network to ask for donations and support. Over 250 people have given money already.

Young adult author Jason Reynolds signed up immediately. He remembers when the house was for sale a few years ago. He never wants to see that again.

"I kept thinking, this is just like New York, nothing is sacred," Reynolds told CNNMoney.

Can they raise the money in time?

Reynolds is one of many authors, especially in the African-American community, who dream of doing a reading there. The plan is to turn the main parlor into a space for events and use the upstairs rooms as places for artists to work or for classes.