The lion can sleep tonight 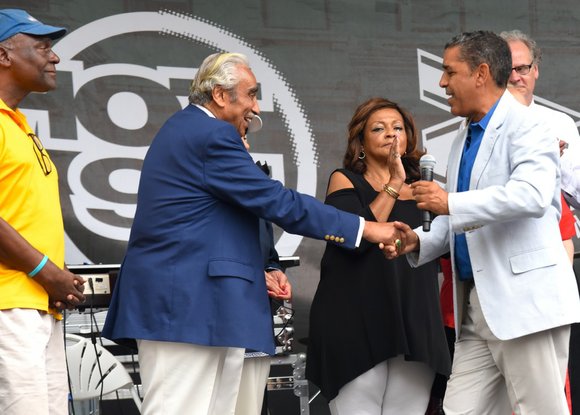 Congressman Charles B. Rangel is universally known as the “Lion of Lenox Avenue,” but the roar heard during a Harlem Day tribute for him Sunday was one of approval from a crowd not too far from his home in Lenox Terrace.

With his wife, Alma, standing nearby onstage, the chairman was serenaded with words of praise from several of the most prominent elected officials and civic leaders. They were summoned to the stage by the moderator, Lloyd Williams, president and CEO of the Greater Harlem Chamber of Commerce.

It was as if each speaker was determined to outdo the other in citing accolades befitting a man who has served his community for 46 years. And when it comes to finding words to match the moment, few can match the Rev. Al Sharpton.

After recounting the election year in 1970, when Rangel defeated Adam Clayton Powell Jr. in the primaries, Sharpton said that many thought no one could fill Powell’s shoes, “but what they didn’t know is that Charlie Rangel has shoes of his own.”

There was no way Sharpton was going to talk about Rangel without mentioning the Gang of Four—the late Percy Sutton and Basil Paterson, and the still active former Mayor David Dinkins—but he added Hazel Dukes to the list, as well as noting that the real “backbone” of the Gang of Four was Alma Rangel.

“No matter who has the title, we know who the real Lion of Lenox Avenue is,” Sharpton said, alluding to State Senator Adriano Espaillat, who defeated Assemblyman Keith Wright, both of whom shared the stage with Rangel.

“When he roars, the nation trembles,” Sharpton said, concluding his introduction of the congressman.

Taking the microphone, Rangel began by telling a story he has told many time about his postwar years working in the Garment District and having a hand-truck load of merchandise tumble onto the rainy streets, blocking traffic. “I was soaked and I began to walk straight to the Veterans Administration,” he said. “I left those boxes and hand truck on the street. I knew I needed help.”

After acknowledging his wife and recalling their first date and marriage, he told the audience and the celebrants, “I ain’t finished yet.”

Nor were the dignitaries finished saluting him, and none more illustrious than Adrian Council and Jean Wells, who presented him with a huge blowup of the cover of their latest The Positive Community magazine, most of the issue devoted to Rangel’s life and legacy.

Gov. Andrew Cuomo wasn’t able to attend, but he sent a proclamation and a representative who recited many of Rangel’s accomplishments. There were comments from Manhattan Borough President Gale Brewer, Assemblyman Wright, Espaillat, Hazel Dukes of the NAACP, the Rev. Jacques DeGraff and Council Member Inez Dickens.

Dickens’ speech was a rousing shoutout to Harlem and to the congressman, so much so that when she was through, a spectator said if Rangel is the Lion of Lenox of Avenue, then she was the lioness.

This day was a special Harlem Day and the Lion of Lenox Avenue slowly departed from the stage, taking his wife’s hand as they headed to their nearby den.