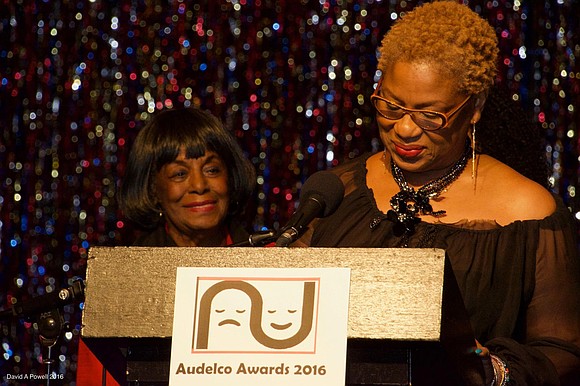 Last Monday night was the annual heartwarming Black Theater family reunion, acknowledgement of extraordinary talent and a love-fest. Yes, I’m talking about the 44th annual AUDELCO “VIV” Awards at Symphony Space-Peter Jay Sharp Theatre on West 95th Street. Every year, members of the theater family descend upon this venue, and it’s a chance to see old friends, hear words of admiration and encouragement and recognize excellence in Black theater. This year the theme was “Standing on Solid Ground,” and from the stage there was a call to action, especially in LIGHT of the presidential election. People such as evening co-host George Faison encouraged Black theater artists to come together and be supportive of each other. So many people who took the stage that evening had remarks to make about the president to come and stated that we have to continue strong and tell our stories, and charged our people to support Black theater and support each other.

The evening, which was also co-hosted by producer, writer, director, choreographer, composer, essayist and singer Alyson Williams and composer, lyricist, musical director Kenny Seymour, began with the audience singing along with Vanessa Shaw to “Lift Ev’ry Voice and Sing.” As with every year, the atmosphere was warm, uplifting and energized. This audience comprised not only people who love theater but also the creative people who make it, from actors to directors to playwrights. I so look forward to going to this event every single year.

Williams sang “I Keep Holding On” with great spirit. By the end of the evening, the VIV went to some very deserving productions and performers. Topping things out with four VIV wins was “Maurice Hines Tappin’ Thru Life” from New World Stages, which won musical production of the year, two VIVs for Hines as outstanding performance in a musical-male and choreography and director/musical production for Jeff Calhoun. I had the pleasure of seeing this production and can vouch for the fact that it was spectacular.

“Skeleton Crew” from the Atlantic Theater Company won three VIV awards for dramatic production of the year; for playwright, Dominique Morrisseau; and for director/dramatic production, Ruben Santiago-Hudson. I was thrilled with these moments of recognition for this play because it was deeply touching to watch as Morrisseau let audiences experience what hardships factory workers go through. It was a play that mattered.

“Head of Passes” from the Public Theater received two VIVs for supporting actress, Alana Arenas, and set design, G.W. Mercier. Classical theater of Harlem’s production of “Macbeth” received two VIVs for lighting design, Alan C. Edwards, and costume design, Rachel Dozier-Ezell. Best revival went to New Federal Theatre for “In White America.” In the category of lead actress, a well-deserving Marjorie Johnson won for her portrayal of an elderly woman with Alzheimer’s in “Dot,” a play from the Vineyard Theatre, written by Colman Domingo. When I had the pleasure of seeing that show, Johnson’s performance was so moving to watch. She completely captured the confusion, sadness and bravery of this character. Someone who was very relatable to the audience. Johnson was honored to receive this acknowledgement. Domingo was inspired to do this piece because she knew people whom Alzheimer’s affected.

Johnson shared, “I did research on it for the role and realized that a childhood girlfriend of mine was showing evidence of the disease and it broke my heart. I did the work observing people. I’m so honored that AUDELCO is out there. There is Tony Awards, but AUDELCO, this is our awards, Black theater. If it wasn’t for AUDELCO people wouldn’t know about Black theater.”

Actor Joe Morton won Lead actor for “Turn Me Loose” in which he portrayed Dick Gregory and was totally engaging to watch. He presented the character with multiple layers and helped the audience to see the gifts and brilliance of Gregory.

Outstanding performance in a musical-female was won by Tina Fabrique for “The First Noel” from Classical Theatre of Harlem. The play will be performed soon at the Apollo Theater.

In the category of solo performance, the knock-out punch performance came from Reginald L. Wilson for his work in “Sugar Ray,” in which he shared what happened in this boxing legend’s life. Outstanding ensemble performance went to the cast of “Dead and Breathing” from the National Black Theatre.

The VIV for supporting actor was received by Kim Sullivan for his role in “The Piano Lesson,” presented by the Gallery Players.

The VIV for sound design went to Obadiah Eaves and Sten Severson for “The Total Bent” presented by the Public Theater.

Throughout the evening there were other honors presented. Debra Ann Byrd received a special award for her portrayal of “Othello.” Byrd, of course, is the founder and producing artistic director of Take Wing and Soar Productions. For her acceptance speech onstage she forcefully delivered words from “Othello” to the audience’s appreciation.

When I asked her how she felt about the honor, she replied, “I feel extremely blessed. It feels wonderful to receive an honor for a work you worked very hard on. It is not easy to become a man and be one for eight weeks. I played Othello, it was an all-female production.”

Doing this role and the work of Take Wing and Soar Production is extremely important to Byrd. She recalled, “When I graduated with training in classical theater, I was told it would be challenging for me to get roles by an agent. I said somebody has to do something about this and I formed Take Wing and Soar Productions. I said we have to create our own space and let them see we can do this. I’ve watched it happen over the last 15 years.”

Other honorees for the evening included director Walter Dallas, who has been in theater for 50 years and who received a special pioneer award; Negro Ensemble Company artistic director and a multiple award-winning actor, Charles Weldon, who received a special pioneer award; Diversity Players of Harlem co-founder Shawn Luckey, who received a special achievement award; and actor/director Jeffrey V. Thompson, who received a special achievement award. Producer Karen Allen Baxter received the Board of Directors award for her vast work in theater. Playwright of more than 300 plays in a 30-year period, Vivian Bonnie Wright, founder of Afrikan Women’s Repertory, received the Board of Directors award. The winner of the Rising Star Award was Shahadi Wright Joseph. She was the youngest girl to be cast as Nala in Disney’s “The Lion King” on Broadway and is going to be in the upcoming “Hairspray Live.” She also performed on Broadway in “School of Rock.”

The evening had so many uplifting and phenomenal moments. One that I will never forget is when Rome Neal of the Nuyorican Poets Café, and a past six-time VIV award winner, came onstage with a huge bouquet of flowers and presented them to AUDELCO president Grace Jones. He sang “Here’s To Life” and danced around her as a poem about her was recited. The audience was moved as this tender, real feeling of love and appreciation was displayed for a wonderful woman who is at the helm of this marvelous organization that puts the spotlight on Black theater!

When Neal was done, Jones was wiping the tears, and I was wiping my eyes as the audience stood up, cheered and applauded.

Please, find out about AUDELCO. Join the organization and see what you can do to assist it. Black theater is us telling our stories. Make sure that it stays alive.