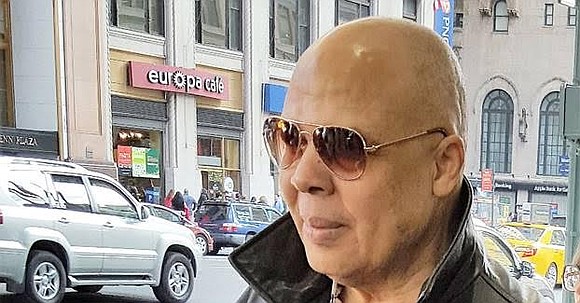 There is a photo of two iconic African-Americans, Maya Angelou and Amiri Baraka, doing a furious version of the jitterbug atop a cosmogram in the atrium of the Schomburg Center for Research in Black Culture. This flat geometric figure created by Houston Conwill is a memorial to Langston Hughes and depicts the rivers he cites in “The Negro Speaks of Rivers.” An urn containing Hughes’ ashes is incorporated into the work. It is just one of the sculptor’s remarkable monuments. Conwill, 69, died Nov. 14 in the Bronx of prostate cancer, according to his wife, Kinshasha Holman Conwill.

The cosmogram is just one example of Conwill’s singular vision, his unique way of rendering a historic milestone in Black history and culture. A similar statement of profundity and art is his cascading waterfall that washes over the words of Dr. Martin Luther King Jr. at the Yerba Buena Performing Arts Center in San Francisco.

Another impressive Conwill work of art, to some extent mirroring his cosmogram, is at the African Burial Ground and is entitled “The New Ring Shout,” capturing a spiritual moment in Black history, a circular creation that epitomizes an array of Africanisms.

Throughout his work, Conwill expressed an abiding interest in finding ways to meld African heritage with contemporary issues. His “Poets Rise” at the Social Security building in South Jamaica, Queens, is further evidence of this mission.

Born April 2, 1947, in Louisville, Ky., Conwill was the son of Giles Conwill and Mary Luella Herndon. For a while he was a student in a Benedictine monastery before enlisting in the Air Force. During his military tenure he served in Vietnam as a communications operator.

As an art student at Howard University, Conwill associated and worked with such artists as Lois Mailou Jones, Sam Gilliam and Skunder Boghossian. He had his first exhibition in 1971 that featured canvases stretched over pyramidal shapes. Two years later, he graduated from Howard University with a fine arts degree, and then received his master’s degree in fine arts from the University of Southern California.

While he was earning his degree at USC, his wife, Kinshasha, was the curator of Frank Lloyd Wrights’ Hollyhock House, where they lived for two years.

Over his long and productive career, Conwill, often working with his sister, Estella Conwill Majozo, a poet, and architect Joseph DePace, has left a legacy of impressive signposts, signifying his love of myth, ritual and “the transmission of wisdom across continents and generations,” as he often told interviewers.

And how many students who sit beneath the 26-foot “Arc” at York College realize its African meaning and that it was done by an African-American sculptor?

Among Conwill’s many awards and honors was a Guggenheim fellowship and the Rome Prize from the American Academy in Rome.

As we go to press there is no information about burial or funeral services for the distinguished artist.