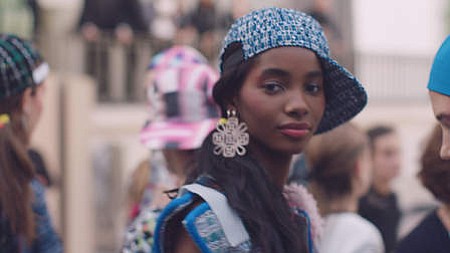 Designer Bibhu Mohapatra’s spring/summer ’17 backdrop was set in a prewar era. It was a time characterized by flourishing art and literature. His spring ’17 collection is inspired by the hidden identities of the females of la Belle Époque. It celebrates the optimism, prosperity and cultural innovations of that prolific time.

Mohapatra’s show opened with a cotton guipure dress with pleated wings and a Bibhu-Artemus diamond ring. Each outfit was influenced by the brilliant colors and shapes of various birds, such as the parrot, parakeet, swan, cuckoo, sparrow, hawk, cardinal, stork and other birds of paradise. His rich details were astonishing, such as the pleated tiered dress with a pearl and leather choker. Amazing embroidery, ruffle sleeves and color-block embroidery enhanced this beautiful collection. Among other outfits, a pleated satin tail skirt was worn with a silk linen shirt. His draped dress with a nail-head bustier also stood out.

While growing up with his family in Orissa, on the coast of India, Mohapatra acquired an appreciation for sumptuous Indian fabrics and vibrant colors. He moved to America in 1996, and graduated from Utah State University with a master’s degree in economics, and then he moved to New York in 1999. He honed his designing skills while working with Halston. He was also hired by the iconic furrier J. Mendel, where he held the position of creative director for nine years. He developed his talent and sense of style with his cutting-edge designing of glamorous evening gowns. He has dressed notables such as First Lady Michelle Obama and celebrities such as Hillary Swank, Glenn Close and Gwyneth Paltrow. His clothes are sold at Bergdorf Goodman, Neiman Marcus and a select group of specialty stores across North America, Europe and the Middle East.

In Paris, Chanel’s collection (designed by Karl Lagerfeld) focused more on accessories. It’s delightful to see what you can do with a traditional Chanel suit (such as a colorless bolero jacket and skirt in an extraordinary tweed, check or pattern), especially the jacket. Chanel’s spring/summer ’17 collection gets points for versatility in the line. Accessories stay in focus, along with contrast trims and details. Oh what fun to have fancy hairstyles, caps, hats, sunglasses, shoes, boots and stockings.

Fashion note: The way you wear your outfit is important. Old style rules no longer exist. Anything goes, as long as it looks good on you. Of course, you should dress for the occasion. Chanel’s toppers were long and short, swing-styled or straight shaped and with or without lapels. Some jackets were buttoned, zipped or just hanging loose. However, you can also wear a belt. Coats and jackets were accompanied by knee-length skirts and miniskirt cuts. You will have the most fun dressing with accessories. This collection seemed to have drawn a younger audience. The look was refreshing, youthful and fun.