Mariah's World' lives down to expectations on E! 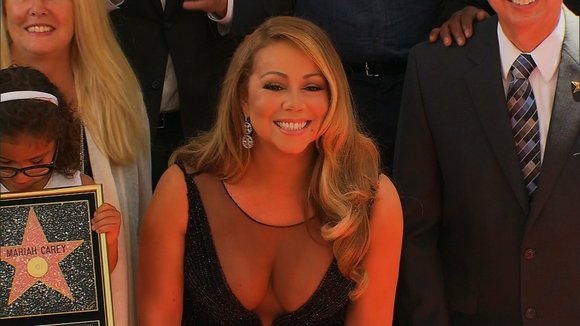 Mariah Carey finally got a star on the Hollywood Walk of Fame on Wednesday, August 5, 2015. POOL

(CNN) -- To say that "Mariah's World" is a predictable train wreck serves more as promotion than criticism. Yet even by the standards of reality docu-series, this E! showcase for pop diva Mariah Carey is pretty hilarious, especially with everything that's transpired since the point where the show's storytelling begins.

Those who watch such fare for the kitsch factor will have plenty in which to wallow, as Carey conducts most of her direct-to-camera interviews provocatively draped across a couch, looking a bit like Cleopatra being ferried across the Nile. She also appears near the outset (after a segment that basically summarizes the whole series in two minutes) as a character named "Bianca Storm," wearing a wig and affecting a British (sort-of) accent.

Carey is shown cavorting on a yacht in Capri, Italy, and fretting about agreeing to do the show at all, citing how "little privacy" there is in entertainment. One might ask why she would then agree to the prying eyes of cameras -- including footage of her young children -- but if there's one guiding rule for E! and Bravo shows (sister networks that will simulcast the premiere), it's perhaps best not to overthink them.

The drama, such as it is, centers on the collision between Carey's personal and professional lives, as she prepares for a European concert tour while planning her wedding to Australian billionaire James Packer. The two have since split up, which should foster some suspense about how much if any of that will be reflected over the eight-episode run. (Conflicting reports have suggested his presence in the show might be edited.)

In the interim, "Mariah's World" falls back on conventional reality-TV strategies, with the usual tension and chaos that surrounds balancing the singer's various commitments. There's also a supporting cast, for lack of a better term, that includes her foul-mouthed manager, Stella Bulochnikov, who tartly tells a candidate interviewing to be Mariah's personal assistant that she's not allowed to either date or cry.

Others in the ensemble include Carey's nephew, Shawn McDonald, and her backup dancers, who gripe at one point about wearing outfits that will make it hard for them to move. The only tougher job here, frankly, might be the show's editors, who, given how much the narrative jumps around, are deserving of combat pay.

"'Mariah's World' is a fantasy many wish was their reality," E! says in its press release.

There's probably more fantasy -- and certainly playing to a Carey's well-crafted image -- than reality in "Mariah's World." But the artifice and choreography don't prevent the show from being just the sort of oddity that should keep fans coming back for more.