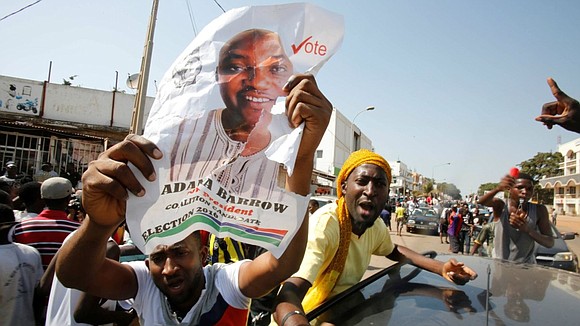 The prospect of another stolen election by the flamboyant President Yahya Jammeh took a surprise turn this week when the Gambian leader calmly accepted his defeat at the hands of opposition leader Adama Barrow.

In a concession speech broadcast on state TV, Jammeh declined to contest his loss.

“I told you, Gambians, that I will not question the outcome of the results and will accept it,” he said. “I did not wish to contest or find out why [some] did not vote for me. I leave that with God.”

Only days before, Jammeh had confidently predicted that he would rule for a billion years.

In fact, Jammeh was among those leaders disparagingly called “presidents for life.” Despite constitutional mandates restricting their years in power, these leaders have extended their terms indefinitely. They include in a partial list: Paul Biya of Cameroon, holding power since 1982, Yoweri Museveni of Uganda since 1986, Robert Mugabe of Zimbabwe since 1980 and Teodoro Obiang Nguema Mbasogo of Equatorial Guinea since 1979.

Jammeh seized power in a coup in 1994. He became known for making unproven claims to cure AIDS with herbs, for threatening to behead gay people and to kill members of the Mandinka ethnic group “like ants” and for arresting and prosecuting journalists and supporters of the opposition.

For this reason, Gambians urged a reporter not to make the common outsider’s mistake of treating their leader as a maverick or eccentric. “Tyrant” was nearer the mark, they said.

Until his victory, Barrow, the new president, was not a household name in The Gambia. He was described as “little-known” even by the local media houses supporting him.

A member of the Fula ethnic group, Barrow was born in 1965, the year of Gambian independence. After studying in the U.K., he returned home in 2006 and set up a real estate business.

“Gambians have been suffering for 22 years,” Barrow told the BBC, “and we’re ready for change.”

“It is the birth of a new Gambia where we can together as people raise our fists to the sky and say ‘never again shall we experience dictatorship,’” exulted Sheriff Bojang Jr., a Gambian journalist speaking from Dakar, Senegal, where he has lived in exile for the past 15 years.

(GIN)—While Ghana busied itself with national elections taking place this week, the U.S. State Department and other agencies were cracking down on one of the most eye-popping corruption scandals in this West African nation.

Operating in the center of Accra, a pink building festooned with an American flag was doing a brisk business selling U.S. and other visas, all under the eyes of officials of the U.S., Ghana and the Netherlands. In a fake “embassy” which peddled real visas, fraudulently obtained, the fake “consuls” managed to elude investigators for a decade.

Visas and passports from 10 different countries were found during raids on the nondescript stucco building with the corrugated tin roof, the State Department said.

After receiving a tip last summer, authorities shut down the operation as part of a joint investigation with diplomatic security agents, local authorities and other international partners called Operation Spartan Vanguard.

It was a business run by both Ghanaian and Turkish organized crime rings and a Ghanaian attorney practicing immigration and criminal law. The “consular officers” were Turkish citizens who spoke English and Dutch and were able to pay off corrupt local officials to look the other way as well as obtain legitimate blank documents to be doctored.

The State Department did not say how the gang obtained the authentic visas or how many people were believed to have illegally entered the U.S. and other countries using visas issued by the crime ring.

The criminals advertised on billboards in Ghana, Togo and Ivory Coast and brought clients from across West Africa to Accra where they rented them rooms in nearby hotels.

There was no immediate comment from Ghana’s Criminal Investigations Division.

Now, in the waning hours before votes are cast, Ghanaians will have to decide among seven political parties, all of whom have anti-corruption planks in their campaigns. Yet this decade-long scam in full view of city and government officials seems to raise doubts about their effectiveness.

Seven out of 10 Ghanaians believe the country is headed in the wrong direction.

“Ghana would have been the mainstream of developed nations by now, but we missed the way,” remarked former president John Kufuor of the New Patriotic Party. Incumbent President John Mahama instructed, “You don’t change your best player,” at the windup of his campaign.

Vote wisely with the love of the country at heart,” ex-President Kufuor advised.