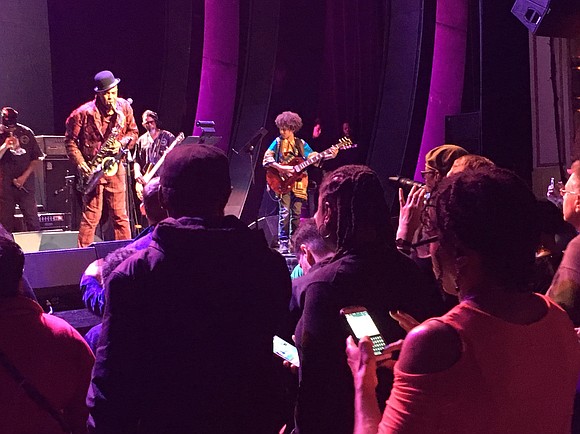 The Apollo Theater is the most renowned music hall on the planet. So to say the recent celebration of “Jimi Hendrix in Harlem” should be added to the best performances to hit that world famous stage is a big deal.

The bar was set extremely high, dating back to 1934, when the jazz singer and Broadway star Adelaide Hall first brought a show-stopping blaze to the stage. From that point on it became the reservoir where talent soared and reputations became revered.

If you haven’t played the Apollo, you need to keep your wishing cap on.

Fishbone, the hard-edged late 1970s Black rock group, served as the evening’s house band. Like Hendrix, they have that funky edge, allowing listeners nowhere to run but smack into the rocket-funk of it all.

The guitarist Ernie Isley, singer Nona Hendryx and the young 12-year-old guitarist Brandon “Taz” Niederauer joined the blast with Fishbone on a riotous rendition of “If 6 Was 9.”

Most are familiar with the talents of Hendryx and Isley, but the young prodigy Taz invited the audience into his own little rock garden. “Hey, who’s the kid?” someone asked. Put him in that category with the young drummer Kojo Roney and pianist/composer Joey Alexander. Now that would be a frightening trio of youngsters.

At 10 years old Taz played with the Gregg Allman Band and has since hit the scene with George Clinton and Parliament Funkadelic, Trombone Shorty, Jon Batiste and Eric Gales. Currently he is on Broadway in the production “School of Rock.”

The vocalists Liv Warfield, Alice Smith and Saul Williams put their twists on tunes such as “I Don’t Know What You Got But It Got Me,” “Dolly Dapper,” “Have Mercy” and “Dancin All Over the World.” The guitarist Gary Lucas was also a high note at the party.

Fishbone raised the flames with an original tune “Psychologically Overtime,” and their fiery version of Curtis Mayfield’s “Freddy’s Dead.” Everyone joined the finale with “Johnnie B. Good,” a Hendrix staple made famous by Chuck Berry.

The concert’s “Hendrix contemporaries and those inspired by his Legacy” arrived on the Apollo stage ready to captivate and invigorate a passionate audience to kiss the sky.

Witnessing the Antoinette Montague Experience allows for a tingling audience baptism in the religion of blues and jazz, as those in the audience declared after her recent appearance at the New York Bahai Center/John Birks Gillespie Auditorium.

For this outing she was accompanied by the other members of her versatile trio, the pianist/composer Danny Mixon and bassist Melissa Slocum, along with a heightened rhythmic swing from Cecilia Coleman’s big band.

The trio opened with “Let the Good Times Roll,” a furious up-tempo fling with Montague’s mid-timbre vocals spicing it up with a burst of blues. Mixon’s pearly keys were pulsating as Slocum stayed deep with a moving melodic beat.

Coleman took the piano seat as her big band eased into the standard “I Can’t Give You Anything But Love.” Montague wrapped herself in the song’s softness and let the lyrics flow as her own story unfolded with a jaunting soulful swing.