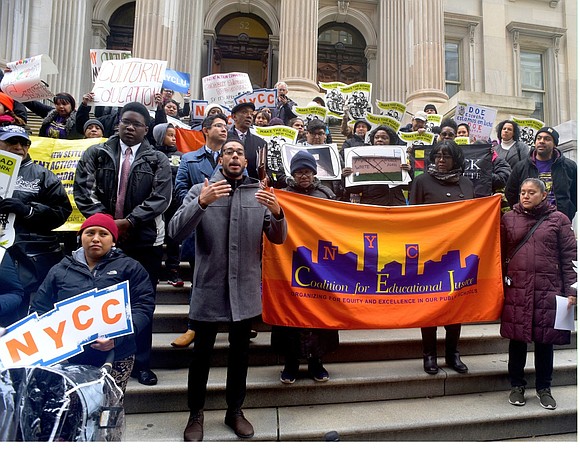 “My students are terrified of Donald Trump,” said a teacher from a middle school with a large population of African-American Muslims. “They think that if he’s elected, all Black people will get sent back to Africa.”

As the fallout from the presidential election of Donald Trump continues, reports of hate crimes continue to rise. However, in schools across the nation, students are also feeling the brunt of the rhetoric the president-elect ignited that got him to the White House.

With the city’s public school makeup consisting of at least half a million students whose families are immigrants and hundreds of thousands of Black, Latino, Muslim and LGBTQ young people, these students are prime targets in a place they are supposed to be safe.

Advocates are calling on the city to confront racism and bias and support schools to be hubs for information on legal rights and recourses and to be sanctuary environments.

While some might think children are not impacted and do not care about presidential elections, recent results of an online survey by the Southern Poverty Law Center reveal just how serious the problem is.

The survey, conducted by Teaching Tolerance and titled “The Trump Effect,” is proof that the election has made its way into the classroom. The non-scientific survey asked 2,000 K-12 teachers nationally about what they’ve seen since the election.

More than two-thirds of the teachers reported that students—mainly immigrants, children of immigrants and Muslims—have expressed concerns or fears about what might happen to them or their families after the election. Half of teachers have seen an increase in uncivil political discourse, one-third have observed an increase in anti-Muslim or anti-immigrant sentiment and 40 percent are hesitant to teach about the election.

Teachers from the New York City area also contributed to the survey and revealed troubling trends they are seeing with students. Teachers in New York reported students being taunted, harassed or engaging in heated arguments about the election that turned physical. “My fifth-graders got in a fist fight on the playground yesterday,” a Queens, N.Y., teacher wrote. “It started when one of the boys quoted Donald Trump.” Teachers are even having a hard time teaching about America’s electoral process. A New York middle school administrator said, “It is so inflammatory that no one wants to even discuss it. Not good when we should be talking about issues.”  “They are increasingly political (which is good),” wrote one New York City high school teacher, “but the extreme rhetoric being modeled is not helping their ability to utilize reason and evidence, rather than replying in kind.”

Parents from the NYC Coalition for Educational Justice recently gathered at the Department of Education headquarters at the Tweed Courthouse to call on the DOE to do more to make schools a refuge from racism, sexism, xenophobia and homophobia for students and families.

CEJ wants the DOE to equip teachers and school staff to support students who are feeling anxious, confused or scared about federal policies the new administration will bring.

“We know that the teaching force is not a direct reflection of the diversity that exists in schools, which increases the necessity to ensure teachers and staff are better equipped to address student needs,” said Zakiyah Ansari, advocacy director for Alliance for Quality Education. “In light of the political and social climate of New York, the DOE has, in many ways, acknowledged the serious threat that students, and especially students of color, may be facing. For the DOE to make this acknowledgement and then fail to take the proper steps in remedying this issue by providing more anti-bias and anti-racist teacher trainings is a failure of leadership.”

Jamaal Bowman, principal of Cornerstone Academy for Social Action in the Bronx, said children are suffering while many teachers, principals and school staff have no idea how to respond.

“The time is now for New York City to show leadership by creating public schools that build and sustain the self-esteem and self-worth of all children,” he said. “To accomplish this, we must implement a culturally relevant curriculum in every school, and ensure that all Department of Education employees are trained in anti-racist and anti-bias pedagogy.”

Bertha Lewis, president and founder of The Black Institute, said students have a fundamental right to a safe learning environment.

“We are calling upon the New York City Department of Education to ensure that all schools will be sanctuaries for our youngest citizens. School should be a place free of racism, sexism, xenophobia and homophobia. After the November election, steps need to be taken now to protect students who are culturally and linguistically diverse,” said Lewis.