Jordan Nixon strives for excellence on and off the court 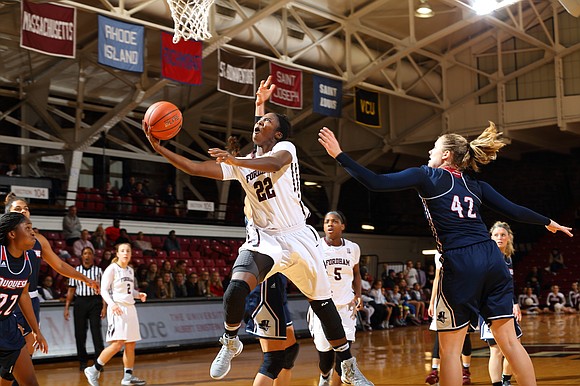 Obsession is often an instrument of excellence. Sixteen-year-old Jordan Nixon is obsessed with the sport of basketball, and her relentless ambition has been an impetus driving the Harlem native to achieve excellence in her fledgling journey.

A 5-foot-8 junior point guard for The Mary Louis Academy in Jamaica, Queens, Nixon, under the tutelage of head coach JoAnn Arbitello and assistant coach Dave Edwards—a former PSAL star at Andrew Jackson in the late 1980s who went on to play for Georgetown and Texas A & M—is one of the top high school prospects in the United States.

“She could play for the New York Liberty right now,” asserted Raven Owen, a longtime fixture in the New York City scholastic basketball community, whose 12-year-old daughter Skye Owen is following in the footsteps of Nixon as one of the most promising players in the tristate area. Owen admittedly was engaging in hyperbole, but the essence of his statement was unambiguous.

While Nixon is not yet ready for such lofty heights, she has captivated a plethora of discerning eyes, perhaps most significantly many of the foremost college programs in the country. The list is extensive and striking. It includes UCLA, Tennessee, the University of Georgia, North Carolina State, South Carolina and Duke.

“Oh, Ohio State just texted me to say they’ve made it to Jordan’s practice,” said Jannae Walch, Nixon’s mother, during a phone conversation with this reporter late Tuesday afternoon. The moment exemplified the dramatic rise of Nixon as an elite hoops prodigy.

It began somewhat by happenstance as between the ages of 3 and 10 years old, she had soccer as her main focus. She excelled in that sport as well, ultimately being selected to a traveling youth team. But in fifth grade Nixon made a decision that at once delighted and shocked her mother and changed the course of her young life.

“She came to me and said, ‘I can’t play soccer anymore,’” recalled Walch. “Jordan looked at me so seriously and said, ‘It’s taking away from my schoolwork. My schoolwork is slipping.’ She was concerned that one of her grades had dropped from an A to a B-plus. That’s how committed Jordan is to academics. She is as driven in the classroom as she is on the basketball court,” Walch proudly maintained.

“Academics are extremely important to me,” emphasized Nixon to this reporter a few hours after her practice Tuesday. “I always try to find a balance between academics and athletics.”

“It wasn’t that I wanted Jordan to give up soccer,” Walch clarified. “But the fact she was so dedicated to her schoolwork is something I think every parent hopes for in their children.”

Before transferring to Mary Louis this school year, Nixon attended the prestigious Horace Mann School in the Bronx. She currently holds a 3.9 GPA, which has attracted several Ivy League colleges.

After setting aside soccer, Nixon began playing basketball recreationally with some of her friends in Morningside Park near her home in West Harlem. An observer noticed the lightening quick little girl dominating her competitors, primarily boys, and recommended her to Kelsey Stevens, a well-known and highly respected youth coach and executive at the Dunlevy Millbank Center of The Children’s Aid Society.

Playing for both the girls and boys teams at Milbank, Nixon rapidly outgrew the local competition she regularly faced and took the next step by moving on to Walter Welsh, a noted youth coach and founder of the prominent girls AAU program iExcel Basketball Inc., for which Nixon plays during the spring and summer.

“Her talent, intelligence and determination were evident from the start,” said Welsh. “Jordan is a special young lady.” So special that she was among the final cuts for a highly coveted spot on the USA Basketball’s 17-U Girls’ National Team in Colorado Springs, Colo., last May. Twitter was buzzing as many who were at the tryouts felt Nixon deserved to make the team.

“I was disappointed, but it was such a great experience,” she reflected. “The opportunity helped me gain a lot of self-confidence and showed that I can play on the level with the best players in the country.”

The humble, budding star is certain to keep social media humming for years to come as she evolves as both an athlete and scholar.