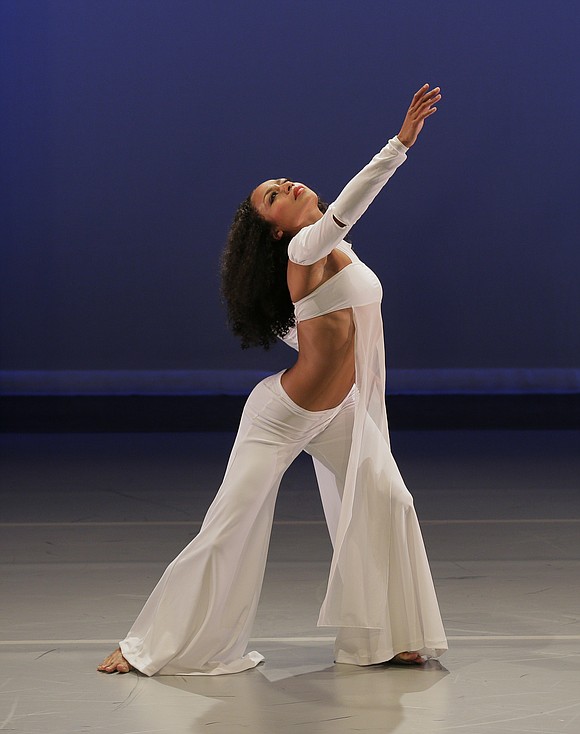 Blessed. That’s the first word that comes to mind during the Alvin Ailey American Dance Theater’s City Center season. It describes the AAADT dancers’ gift of technical versatility as they perform ballet, jazz, modern and African dance styles with steely precision, contagious exuberance and unassuming grace. It also describes how audiences seem to feel at the end of an Ailey performance as they leap to their feet applauding and leave the theater with a spring in their step and smiles on their faces.

Blessings, in fact, are woven throughout this Ailey season’s programs of two dozen works, including premieres, restorations and treasured classics by Alvin Ailey and other celebrated dance-makers, plus a special program honoring choreographer Ron K. Brown’s 20-year relationship with the company.

The night of the Brown celebration, Artistic Director Robert Battle welcomed everyone in his usual easygoing manner. “Wise decision,” Battle adding jokingly as laughter filled the theater, “I don’t know who you voted for, but being here tonight was a wise decision.” As Battle spoke he transformed the audience from a random assembly of strangers into a community and the act of viewing the AAADT into a communal experience. After all, Battle said, “We be family.” That sentiment and, of course, the extraordinary performances combine to make this year’s AAADT City Center season so special.

The special Brown program celebrated a choreographer whose work is characterized by explosive, fluid movement that blends African and modern as dancers leap, glide, swoop and swirl, letting the music flow through them. There was the colorful up-tempo “Open Door” inspired by a trip to Cuba, the joyful excerpt from “ife/My Heart,” “Four Corners” and an unflinchingly spiritual “Grace.” The audience cheered former Ailey dancer Renee Robinson’s surprise entrance in “Grace’s” prayerful opening section as she blessed the space before making way for Linda Celeste Sims and the other dancers who followed.

Boykin’s “r-Evolution, Dream” is a large ensemble work inspired by the timely relevance of messages she encountered during a visit to the National Center for Civil and Human Rights in Atlanta. Boykin blends creative story-telling, new music composed by Ali Jackson and historic and original writings narrated by Tony Award winner Leslie Odom to create images that linger long after the dance has ended. A most enduring image is the opening one of a tall Black man, back to the audience, in white shirt and trousers, gesturing as a voice repeats a speech by Martin Luther King. Later he leads and unites four groups of dancers, each metaphorically dressed in different colors, a symbol of the message of love we should not forget.

Kyle Abraham’s “Untitled America” is simply brilliant. It is a dark, intense work that examines the pain and suffering mass incarceration causes African-American families and communities. Accompanied by a montage of contemporary and traditional music and inmate interviews, it conveys its message with the accuracy of an arrow aimed straight at our hearts. Abraham’s signature mix of modern, hip-hop and gesture draws on the familiar and speaks volumes. There is the Black Lives Matter “hands up, don’t shoot” gesture and clenched fists reminiscent of the hands clutching prison bars on the cover of Michelle Alexander’s book, “The New Jim Crow.” Together with a unique movement vocabulary these works tell gut-wrenching stories and make a powerful statement.

The AAADT’s 2016 season also includes a revival of Alvin Ailey’s own “Masekela Langage,” a searing portrait of oppression that draws parallels between the era of South African apartheid and the race-induced violence in Chicago. South African trumpeter and composer Hugh Masakela’s driving rhythms propel dancers through a string of theatrical tableaux that reflect the painful and bloody cost of oppression.

There are numerous other riveting works on this season’s program, including Battle’s “The Hunt,” which captures the raw ritualistic power of pursuit and conquest, and the late Ulysses Dove’s raw, dramatic and absolutely brilliant “Vespers,” a dance for six women gripped by an unnamed agony and propelled across the stage turning, leaping and contracting with the speed of bullets shot out of a gun. This brilliant work demands a virtuosity that leaves the audience breathless at the end, even as the amazing Ailey dancers handle it without breaking a sweat. “Walking Mad,” Swedish choreographer Johan Inger’s daring contemporary take on Maurice Ravel’s “Bolero,” is a delightful and even funny work that uses a long movable wall to symbolize the barriers we construct in relationships.

We are roughly about half-way through the Ailey season, which ends Dec. 31, New Year’s Eve, and these works are just a sample of the treats in store for anyone blessed to be a member of the Ailey audience/family. The company’s ability to handle these dances and more, including Billy Wilson’s lighthearted jazzy “A Winter in Lisbon” or Alvin Ailey’s timeless masterpieces “Blues Suite” (set to live music) and “Revelations,” and more is no secret. It’s also a gift and a blessing.