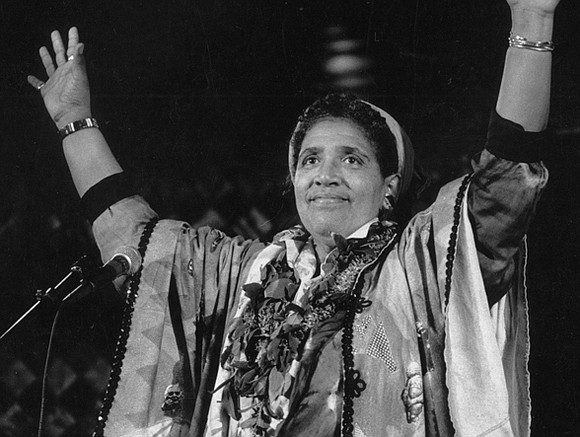 It was wonderful to see Audre Lorde included in a photo collage on the cover of last week’s Village Voice. She was among such luminaries as Amiri Baraka, Allen Ginsberg, William Burroughs and Ishmael Reed, all of them participants of the Poetry Project, now in its 50th year at St. Marks Church-in-the-Bowery.

Other than the photo and her name listed in a roster of writers, there was no further mention of Lorde, and that gives us an opportunity to present her here in the Classroom, where she should have been years ago.

“Audre Lorde is a rare creature, not because of political, racial or sexual concerns,” wrote scholar Joan Martin, in her essay on Lorde in “Black Women Writers, 1950-1980—A Critical Evaluation,” edited by Mari Evans. “She is a Black unicorn: magical and mysterious bearer of fantasy draped in truth and beauty.”

That truth and beauty resonated consistently in her poems and essays, and those factors were never more evident than in “The Cancer Journals” (1980), where she openly and honestly discussed the malignant breast cancer that eventually took her life.

She was born Audrey Geraldine Lorde (she would later drop the y to make the end of her first name symmetrical with the end of her last name) in Harlem of West Indian parents, Feb. 18, 1934. Hampered by poor eyesight, she nonetheless read voraciously, and she listened intently to the stories her mother told and read to her.

“I was very inarticulate as a youngster,” Lorde wrote. “I couldn’t speak. I didn’t speak until I was 5. In fact, not really, until I started reading and writing poetry.”

By the time she was 8, her flair for poetry was evident. She was a teenager and still in high school when her poetry was published in Seventeen magazine.

In fact, poetry was her refuge from a cold and distant family that was preoccupied with their real estate business. As a student at Hunter College High School, her study of poetry broadened and she academically excelled at a school devoted to the gifted. In 1954, three years after graduating from college, she spent an enlightening year at the National University of Mexico. Here, away from the indifference she often encountered in America, she was able to release a lot of pent-up emotions and inhibitions, and to at last express her lesbian feelings.

When she returned from Mexico, she enrolled in Hunter College and graduated in 1959. While there she worked as a librarian and spent many leisure hours in Greenwich Village as a member of the gay community.

Lorde earned her master’s degree in library science at Columbia University and at the same time worked as a librarian at the Mount Vernon Public Library. She had a brief marriage to attorney Edwin Rollins. They had two children before they divorced in 1970. Four years earlier, she became the head librarian at Town School Library in New York City and held that position until 1968.

She published her poetry in various magazines before her first collection, “The First Cities,” was released in 1968. “I have been woman for a long time,” begins her poem, “A Woman Speaks,” from her first volume. “Beware my smile/I am treacherous with old magic/and the noon’s new fury/with all your wide futures promised/I am woman and not white.”