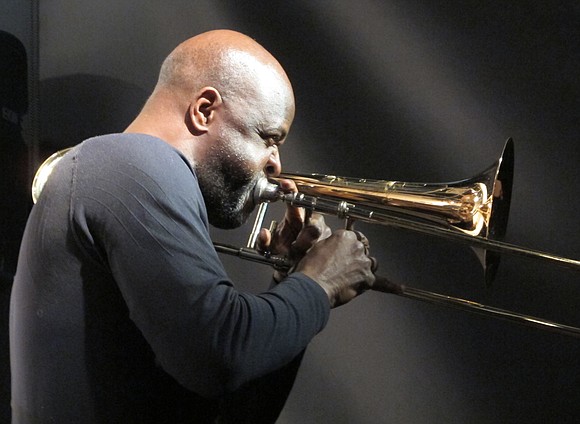 Legendary jazz musician Craig Harris is going back in time to bring people together this holiday season and beyond and is using “God’s Trombones” as his platform. Harris is drawing on the brilliance of this classic book of poems and sees the work as a way to not only unify people but also help heal the planet. “We have a lot of different philosophies, ideologies, [and] religions on the planet and we just don’t seem to be able to get this thing together about unification,” Harris said recently in a popular interview captured on YouTube. “We get caught up into a lot of the religions as opposed to the faith. And that’s what ‘God’s Trombones’ is, a faith-based piece. It’s about harmony of the planet, about bringing people together.”

The book of poems that is the basis of this musical production was originally written by James Weldon Johnson, the poet, activist and former Harlemite who wrote the lyrics of the Black national anthem, “Lift Ev’ry Voice and Sing,” in 1899. As Johnson’s other signature literary work, “God’s Trombones” are poems based on the sermons of “Negro preachers” of that era, but it continues to inspire people today. Written in 1927, the work has been performed all over the world for nearly 90 years, including by Wynton Marsalis. Harris sees “God’s Trombones” as his “contribution to the cannon of a new holiday piece” that can be performed yearly in our communities, as a new tradition. Harris makes note that the work is a large-scale production that features a brass chorus and plenty of spoken word. “God’s Trombones,” he says, also reflects the musical legacy of the United House of Prayer for All People, founded by Charles Manuel “Daddy” Grace in the same decade as Johnson’s work. “They [Daddy Grace’s church] have an incredible trombone tradition,” said Harris. It was directed by Elder Babbs. Harris adds that his production reinterprets and reinvigorates “God’s Trombones” and moves it beyond the sectarian roots of the sermons into the realm of the spirit that underlies all

Harris’ “God’s Trombones” is not new to Harlem. His first presentation of the work was in 2008, and it was directed by the actor Avery Brooks. For two shows only today and Friday, it will be at the historic Mt. Olivet Baptist Church in Harlem. For more information, visit www.CraigSHarris.com or buy tickets at www.WelcomeToHarlem.com.