‘Sing’ is one of the best holiday movie choices 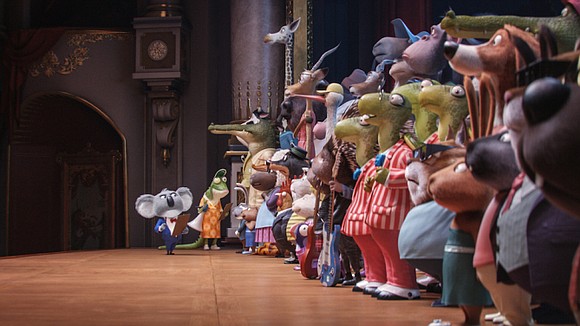 The genius storytellers behind the animated hits “Despicable Me” and “The Secret Life of Pets” have created a rich new, animated musical called “Sing,” with many stars lending their vocal cords to this hilarious movie, including Scarlett Johansson, Matthew McConaughey, Reese Witherspoon and Seth MacFarlane.

“Sing” is about a talent show that’s filled with misfits with hidden musical talent. The main character is Buster Moon (voiced by McConaughey), who is a cuddly koala bear and an awful theatrical producer. An inciting idea to put on a talent show brings together a gaggle of wacky characters trying to win a prize mistakenly reported to be $100,000, not the meager $1,000 that Buster has in his savings account.

Unluckily for Buster, this typing mistake is made by his faithful one-eyed lizard secretary and factotum Miss Crawl (voiced by director/screenwriter, Garth Jennings).

Money brings out the worse in people and that’s clearly the case for Mike, an abrasive mouse on a dangerous hustle (voiced by MacFarlane) but with a voice like velvet.

The other hopefuls include Rosita, a creative porcine mom of 25 (Reese Witherspoon); a brooding teenage British gorilla (Taron Egerton), who doesn’t really want to be a bank robber like dear old dad (Peter Serafinowicz); spiky porcupine songwriter with a punk influence, Ash (Johansson), whose acceptance onto the show jeopardizes her fragile relationship with her insecure boyfriend (Beck Bennett); and Meena (Tori Kelly), the tragically shy elephant who is too scared to sing in front of others and ends up working as a stagehand for Buster.

The best part of “Sing” are the songs, singers, dance numbers and ultimately the characters that bring to life the predictable, sappy and yet absolutely entertaining family friendly musical comedy.

If you find yourself clapping after musical numbers, it’s OK. They are designed to coax that level of participation from an audience. There are so many ultimate crowd-pleasing moments that the enthusiastic word-of-mouth will keep this film in cinemas into the new year.

Back on character, they are inventive, and the studio, Illumination, delivers hyper-rendered animation that pushes the technology envelope, especially in the realm of lighting and cute sight gags. But there are at least two characters who could be cut out of the film and it would make “Sing” work much better.

Maybe the drag of the film is that the “let’s put on a show” talent-show format—which already dominates television—feels exhausted and a tad bit dreary.

“Sing” is packed with at least 65 different songs that most people know. Admittedly some are just a few phrases but it’s enough to prompt you to sing along which, again makes this a family crowd pleaser.