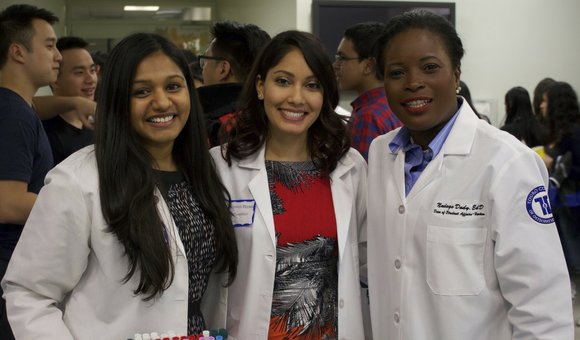 Fifty Harlem high schools students gathered at Touro College of Osteopathic Medicine last week, where they viewed multiple medical procedures and gained hands-on experience through interactive displays at a fair designed to expose them to the world of science and medical careers.

They learned CPR, how to open the airway passages on a robot baby and how to manipulate a foot to treat pain in other parts of the body. They saw the differences between normal and malignant kidney tissue and, after gazing at a map of the world, guessed where diseases were most prevalent. They also stared in awe at a video of hip-replacement surgery, complete with drilling and gushing blood.

“They love the gory stuff,” joked Roopa Patel, a second-year student at TouroCOM and co-director of MedAchieve, the two-year after-school program at the medical school, which was launched four years ago to help turn the teens into doctors who eventually will serve the underserved.

Most of the students are African-American and Hispanic, from A. Philip Randolph Campus High School and Manhattan Center for Science and Mathematics in Harlem, as well as other high schools connected with the East Harlem Tutorial Program, and a few are from high schools in Queens and the Bronx.

“All of the students were really involved,” said Patel. “We hope to open their eyes to medicine and also help them see what an osteopathic medical school has to offer.”

The occasion last Thursday was a hands-on “Specialties Fair,” held to introduce the high school students to medical specialties that are not covered in regular after-school hours. Medical students from close to 20 TouroCOM clubs ran interactive sessions to introduce the teens to the areas of interest and medical and surgical specialties, including emergency medicine, pediatrics, ob-gyn, pathology, orthopedics, human rights, dermatology, family medicine and international medicine.

In their after-school hours, the teenagers attend lectures and labs throughout the school year taught by TouroCOM students, which mirror the medical school curriculum. Each teen is assigned to his or her own TouroCOM student mentor. If the high school students meet certain criteria after college graduation, they are guaranteed a medical school interview at TouroCOM.

“After being here, I know I want to be a surgeon,” said Jordan McDonald, 16, who attends A. Philip Randolph. A resident of Prospect Park, Brooklyn, whose family hails from Jamaica, McDonald said he was inspired to pursue medicine by his family doctor and by his mother, who works as a nurse in a nursing home. The exposure through MedAchieve, McDonald said, has helped him learn more about medicine and focus on neurosurgery as a career path, as well as excel in his chemistry, biology and AP classes in high school.

“The brain is the most important and interesting part of the body,” he said.

McDonald’s mentor, Kowshik Sen, is in his second year of mentoring McDonald. Sen came to the United States at age 10 from Bangladesh and said he became a mentor because when he was younger, such programs did not exist and students had to explore on their own.

“There’s more to medicine than being good at science,” Sen said. “We have artists. We have such talented students. We’re giving them avenues through which they can explore. If you like to draw, even better. You can help someone understand medicine.” Sen explained that he realized Jordan was visual and good at drawing, so they worked together on drawings to illustrate blood flow during a class discussion on the cardiovascular system.

“In [the] suturing workshop, we explored technical skills,” Sen added. “Medicine helps you think in ways you’re not used to thinking. To instill passion, you have to love it yourself. While he’s learning, I am [learning], too. It’s a cool dynamic.”

East Harlem resident Mir Ali Jr. heard about MedAchieve from other graduates of the program and said he was attracted by the prospect of a TouroCOM interview upon graduation from college.

“I want to take advantage of that,” said the 16-year-old sophomore. “I want to help people.”

Ali, whose family came to the U.S. approximately 25 years ago from Bangladesh, has a rare immune system disease, Wiskott-Aldrich syndrome, which he said he has had since he was very young and has involved multiple surgeries. Ali said his father quit his factory job to care for him and now he wants to become a physician to find a cure for the disorder.

“It was a humbling moment,” said Ali’s TouroCOM mentor, Rahul Ahuja, a first-year student from San Francisco, when he learned of his mentee’s health history. “There’s more to life than studying and exams. You’ve got to find a balance.”

Ahuja said he became a mentor to give back to the community. “Why not start with the youth?” he said. “I don’t have siblings. It’s a great opportunity to pass on my knowledge of medicine, of life. Somebody looks up to you, can learn from you.”

He noted that although his relationship with Ali is still new, he is learning more about his mentee’s talents as they go along. For example, he has learned Ali really likes technology. “He’s into hackathons, drone making … a lot more than I was in college.”