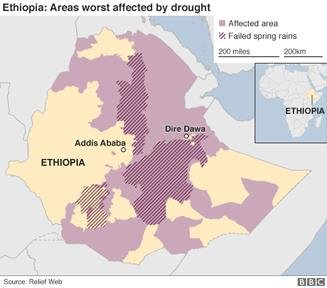 (GIN)—Surely, Ethiopia would rather be known for something other than the cyclical hunger-producing droughts, spurred in part by regular episodes of El Nino.

Ethiopia has been doing very well over the past 15 years or so. It has the world’s fastest growing economy, which has lifted millions of people out of poverty.

Some in the international community may not even remember 1984, when a drought compounded by political unrest developed into a famine that killed more than a million people.

But images of that time still haunt the region, and reports of failed spring rains and land turned to dust have pushed officials to prepare for the worst drought in 30 years. Last month, Ethiopia’s deputy prime minister, Demeke Mekonnen, and U.N. Secretary-General Ban Ki-moon chaired a high-level round table on Ethiopia’s drought response.

The meeting, attended by ministers, ambassadors and representatives from the donor and humanitarian community, aimed to highlight the scale and severity of the current El Nino-caused drought emergency, ongoing responses and gaps.

So far, some $381 million has been dedicated by Ethiopia to the drought response, including $272 million in 2015 and $109 million in 2016. Hundreds of millions have been given by international donors, but the Office for the Coordination of Humanitarian Affairs says only 46 percent of the $1.4 billion needed has been given.

“We need more funding and very quickly—immediately,” said Oxfam’s country director, Ayman Omer. “We need to work simultaneously on saving lives now and preparing for the next harvest. Even if the rain does come March to May, that will definitely help in terms of water availability but will not immediately result in harvest. The harvest season is up to November.”

Speaking with a reporter from Al Jazeera, Alemayehu Berhanu of the Agriculture Ministry described government as “trying hard to save the lives of its citizens and successfully reallocating money from its budget.”

“During the previous drought, we lost a lot of lives and animals,” he said. “Now, because of government action and progress, we, as a country, are more resilient.”

Meanwhile, extremely dry conditions are being seen in Sudan, Eritrea and Djibouti. But in southern Somalia, more than 90,000 people have been hit by weeks of severe flooding, almost half of them forced from their homes, the U.N. said.

In South Sudan, where a nearly two-year-long civil war rumbles on, approximately 40,000 people are already starving, with tens of thousands more on the brink of famine, the U.N. has said.

El Nino is triggered by a warming in sea surface temperatures in the Pacific Ocean. It can cause unusually heavy rains in some parts of the world and drought elsewhere.