Obama to enter nomination fight with legacy on court at stake 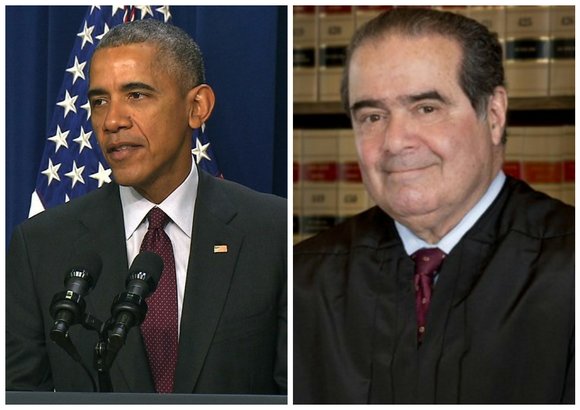 "There will be plenty of time for me to do so and for the Senate to fulfill its responsibility to give that person a fair hearing and a timely vote," Obama said, adding that Scalia was a "towering legal figure."

He continued, "These are responsibilities that I take seriously, as should everyone. They're bigger than any one party. They are about our democracy. They're about the institution to which Justice Scalia dedicated his professional life."

Unlike Obama's previous two Supreme Court appointments, Obama finds himself with a chance to fundamentally change the court's political makeup by appointing a liberal justice, a move that could determine his judicial legacy for years or decades to come.

A major shift in the court's makeup hasn't occurred since 1991, when President George H.W. Bush nominated conservative justice Clarence Thomas to replace Thurgood Marshall, who had amassed a liberal record in his thirty-six years on the high court.

Since then, a five-conservative majority has held steady, though Chief Justice John Roberts has surprised court-watchers by voting with liberals on some key decisions like upholding a key aspect of Obama's signature health care law.

But the high-impact opportunity also comes amid the most rancorous political environment of Obama's tenure, with both chambers of Congress controlled by Republicans and fierce battles within each party for the presidential nomination.

Republicans led by Senate Majority Leader Mitch McConnell have already called on the White House to hold off on nominating a replacement for Scalia, writing in a statement that Obama's replacement should send a name to Congress once in office.

"The American people should have a voice in the selection of their next Supreme Court Justice. Therefore, this vacancy should not be filled until we have a new President," McConnell wrote.

Even a sitting justice, Ruth Bader Ginsburg, has suggested that Obama may not be able to successfully advance a nominee in the current political environment.

"If I resign any time this year, he could not successfully appoint anyone I would like to see in the court," she told Elle magazine in 2014. "[The Senate Democrats] took off the filibuster for lower federal court appointments, but it remains for this court. So anybody who thinks that if I step down, Obama could appoint someone like me, they're misguided."

Finding a potential nominee willing to undergo what will likely become a highly contentious Supreme Court nomination hearing --- with a greater-than-average chance that Republicans prevent a vote from ever taking place --- will become Obama's first challenge.

"The key is to find a candidate who already has broad bipartisan approval --- which is why he'll almost certainly look to sitting federal judges who had relatively smooth confirmations," said Steve Vladeck, a law professor at American University and CNN contributor. "If Senate Republicans voted for the nominee once, it'll be harder to vote against them now."