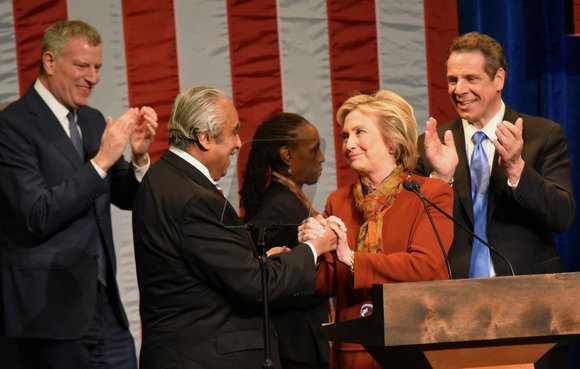 From Wall Street to Harlem, presidential candidate Hillary Clinton was on message Tuesday, and the centerpiece of her objective of tearing down social and political barriers was the African-American community.

Her day began at the headquarters of the National Urban League, where she had private discussions with nine prominent civil rights organizations, including the NAACP and the National Coalition on Black Civic Participation. There was also a roundtable with a number of young leaders at the Urban League, and she lauded them for their emerging political activism.

But it was in Harlem at the Schomburg Center where she had her largest audience and repeated her $125 billion plan to invest in under-served communities, earmarking $2 billion to stop the pipeline to prison that has disproportionately affected young Black Americans. Introduced by Rep. Charles Rangel, who shared the stage with Gov. Andrew Cuomo and Mayor Bill de Blasio and their partners, as well as former Attorney General Eric Holder, Clinton thanked the elite Democrats in attendance before noting the importance of Harlem in the nation’s history.

The community’s diversity was symbolized by the mention of the center’s founder, Arturo Schomburg, and the poet-writer Langston Hughes, “whose ashes are housed here,” she said in an auditorium named after the great poet. “And [Hughes] reminded all of us that life is no crystal stair.” Invoking Hughes’ name allowed her to move comfortably into discussing the barriers that, she said, “disproportionately affect African-Americans.”

She began by recounting her trip last week to Flint, Mich., and the people there who have been sickened by drinking contaminated water. By focusing on Flint, a situation she said was “immoral,” she zeroed in on her message to Black Americans, particularly as she looks down the road to Nevada and South Carolina.

Without mentioning Sen. Bernie Sanders, she told the partisan audience there was a lot more going on in the country than the problems from Wall Street, and she promised to take on their excesses to make sure those who commit crimes on Wall Street are jailed. There was sustained applause and her supporters didn’t miss her veiled reference to Sanders. “There is a lot more going on in our country that we need to be concerned about,” she added.

Employment disparities, affordable housing and gun violence were at the top on her agenda, and the last was stressed and interrupted by rounds of ovation. She touched on the unfair sentencing, in which a white man committing the same crime as a Black man does not receive the same sentence for the same offense. “These inequities are wrong, but they are also immoral,” she concluded, and the audience arose and cheered.

Her remarks on systemic racism were also loudly received, though she pointed there have been gains under the Obama administration. She praised the president for bringing the nation back from an impending depression and creating a health care plan that “insures 18 million people.”

Among some of the improvements in Harlem was the Empowerment Zone, and this one was a special salute to the work of Rangel. “Here in Harlem, the unemployment rate was reduced by two-thirds,” she said.

“When we can guarantee justice and dignity to every American, then we really can make progress,” she stated, putting her comments in a larger context.

But she quickly got back on message for Black Americans, and she promised millions of dollars to create jobs for young African-Americans, who suffered more from unemployment and the lack of jobs than any other population. There was also a promise to support African-American entrepreneurs, “especially Black women.” Again there was an outburst of cheers.

Equal pay and an increase in the minimum wage were greeted with thunderous approval.

On education, Clinton said our school systems in the nation were “more segregated than they were” in the 1950s. Similar to Sanders, she promised to alleviate the mounting costs of higher education with a reduction and refinancing of student debt. Her announcement to assist historically Black colleges was met with appreciation, somewhat catching a whooping audience by surprise.

Reforming the criminal justice system, she noted, “is something we can talk about for hours.” All too often, she continued, the system is stacked against those “who have the least power and who are most vulnerable.” The inability of the formerly incarcerated to get jobs and the rate of recidivism, were issues she promised to address.

The Justice Department, she said, must step in and make communities such as those in Ferguson, Mo., “accountable when they do wrong.”

Clinton’s praise for the work of Holder commanded a boisterous response, and he waved to the audience. Current Attorney General Loretta Lynch was also mentioned and commended.

Quality education, Clinton emphasized, was a civil right, and when school systems failed to adhere to this mission, the department of education should intervene.

She found another opportunity to express her support for President Barack Obama as he meets the challenge of naming a new Supreme Court justice after the death of Justice Antonin Scalia. The Republicans have promised to block his nomination as though “he was not the real president,” Clinton said. Hatred and bigotry have no place in our daily lives or in politics, she added.

Toward the end of her hour-long speech, she brought up the name of Marian Wright Edelman, a woman who put her on the track to political activism and social service. “She channeled me on the path to social justice,” Clinton effused about the founder of the Children’s Defense Fund.

She was approximately 40 minutes into her speech, having discussed the importance of Edelman in her life, when there were several minutes of coughing. Several sips of water and some sort of throat lozenge eased the spell, but it was chants of “Hillary, Hillary,” that gave her the time to recover and to resume.

Mustering what remained of an increasingly hoarse voice, Clinton reiterated the core of her message, insisting she would do whatever it takes to “tear those barriers” of limitation and create more opportunities for all Americans.

Only her march through the packed auditorium and embracing followers was enough to tamp down the euphoria and delirium from a rousing speech in Harlem and a message for the rest of the Black electorate.