The classics according to Dada Masilo 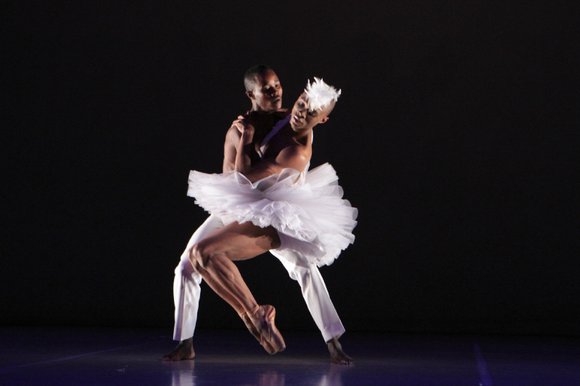 It is a brave thing to put oneself among a large pool of choreographers determined to rework the proverbial 19th century ballet classic “Swan Lake.” The South African choreographer and dancer Dada Masilo has done so and she has succeeded. Masilo’s 2010 version of “Swan Lake,” for the most part, holds to the general story: There’s an arranged marriage, a bunch of partying in the village and true love drives the story. Gone however is the European frame in total, but present is a re-envisioned version that includes African rhythms, call-and-response, bare feet, males and females in tutus activated by their bottoms jiggling at the audience and the story of two men in pursuit of love.

Masilo’s version is not new; Matthew Bourne’s radically contemporized, masculine version comes to mind. Because of her love and training in classical ballet, contemporary and African dance forms, Masilo has made a mark on the dance world. To date, the other classics she has re-worked are the William Shakespeare-inspired “Romeo and Juliet” (2008) and George Bizet’s “Carmen” (2009) for her company Dada Masilo/Dance Factory Johannesburg.

“Swan Lake” was next in line, but also because of her dedication to melding these forms and celebrating her African heritage, there was more. In an interview for The New York Times just before the New York premiere, Masilo said, “I want to open up conversations about issues like homophobia and domestic violence, because those are realities at home.”

When the curtain rises at the Joyce Theater, the house fills with Pyotr Ilyich Tchaikovsky’s music, which usually opens the second act of the ballet. Then, two by two, all 12 dancers, men and women in fluffy white tutus, take the stage. A very funny Nicola Haskins (who plays both Master of Ceremony and Siegfried’s Mother) follows with a tongue-in-cheek mini history of the ballet and gives blow-by-blow descriptions of some of the movements; she speaks and a dancer demonstrates. Arm movements, for example, are described as “seaweed arms,” while the famous dying swan position on the floor (legs in the shape of an angular P, with torso and arms slumped forward) is called “the nobody loves me fall.”

Masilo's fusion of forms is deeply evident in the fast, furious and fulfilling group work, where in seconds each dancer commands the swift switching from ballet to contemporary to African forms with ease. Recurring indicators of the beginning or end of an electrifying phrase were guttural sounds or rousing stomps. Siegfried, danced by Thabani Ntuli, and Odile, danced by Thami Tshabalala, are masters at showing Masilo’s mix of classical and contemporary. In a lovely solo, Masilo danced the role of Odette to Saint-Saens’s “The Dying Swan.” Masilo’s contrapuntal use of movement with the classics, most especially the way the classical European tutus take on a funky life of their own, is simply brilliant. The word is out that she will take on “Giselle” next.