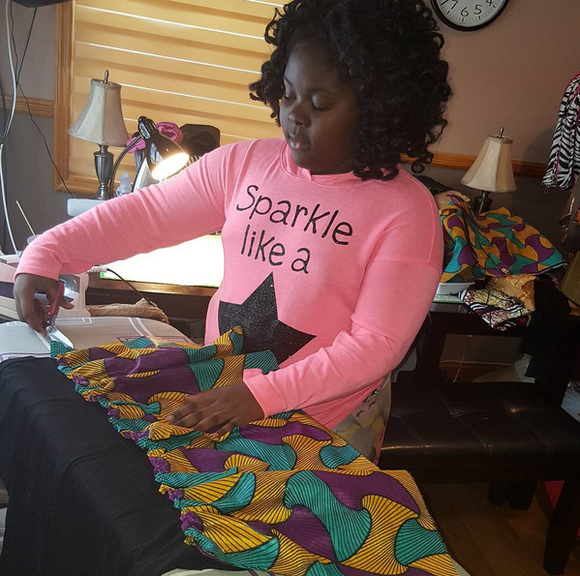 (CNN) -- A 10-year-old fashion prodigy is standing against bullies from her school by debuting her size-inclusive clothing label at New York Fashion Week.

Egypt Ufele, who goes by "Ify," started designing clothes to cope with bullies who taunted her about her weight at her school in the Queens borough of New York.

"I was bullied, and they called me all kinds of names. One time I got stabbed with a pencil," Ufele told NBC's "Today."

At first, Ify just made outfits for her dolls. Then she started cranking out women's and girls' clothing for all shapes and sizes with her grandmother's sewing machine.

"She started making doll's clothes with a regular sewing needle with the hand. And she started designing clothes and sketching," Nellie Rembert, Ify's grandmother, said to "Today."

Now, Ify has launched her own line of clothing, called Chubiiline, and has become a trailblazer as possibly the only child designer to dress plus-size models at one of the world's most prestigious fashion shows.

She hopes her passion and artistic vision will empower others facing adversity.

Ufele's Afrocentric and eye-catching fashions propel Chubiiline's goal of "Bringing Africa to America; One Design at a Time."

The enterprising preteen also leads a BullyChasers movement that works to spread awareness on gun violence and bullying. More than 3.2 million students in the United States are bullied each year, according to DoSomething.org, an advocacy group.

Some big names have shown support for her cause. Actor Mack Wilds, recording artist Lil Mama and Miami Heat player Anthony Mason Jr. were spotted with Ify at a "Ballin' 4 Peace" celebrity basketball game earlier this month at York College in Queens.

"My God is (awesome) ... he is bringing me from a tragedy to a triumph," Ify wrote Wednesday on her Facebook page. "Never give up even when the world seem cruel."