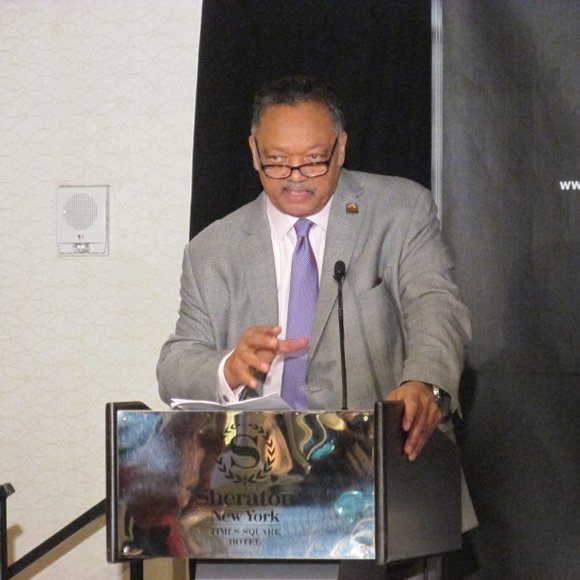 Jackson also marked 50 years since the founding of S.C.L.C.’s Operation Breadbasket in Chicago. Several people discussed how the organization worked to combat the struggle for economic justice that continues today.

The summit brought together the nation’s leaders in political, corporate, entrepreneurial and other fields to Wall Street, all to discuss the economic concerns distinctive to communities of color.

Throughout the summit, seminars explored solutions and remedies for the lack of diversity among finance companies and individuals who are charged with managing the billions of dollars that are invested by public and private companies, as well as institutions such as hospitals and universities.

“The Wall Street Project, it is not an end in itself, or a means to an end, but an evolutionary process,” said Jackson. “The road to shared economic security travels through two-way trade, where all are included and none is left behind.”

Tuesday, there was a focus on the role of historically Black colleges and universities and their connection to Wall Street. Discussions were held on the importance of preparing students from HBCU business schools in an effort to diversify corporate America. Several students from Black colleges were in attendance.

Microsoft Chair John W. Thompson was honored at the 19th Annual Rainbow Push Wall Street Project Gala Wednesday. Thompson is chairman of the board of the multinational technology company that had $93.6 billion in U.S. revenue in 2015. “News One Now” host Roland Martin served as master of ceremony for the event.

Among the entertainers performing at the summit were Philip Bailey, lead singer of the legendary group Earth, Wind & Fire, who provided entertainment at the gala Wednesday, along with cast members from the Broadway’s “The Color Purple,” who performed at a luncheon Wednesday.

The summit closed Thursday with sessions on professional athletes and business, African investment opportunities, access to capital through crowdfunding and alternative funding sources and the business of hip-hop.

“Just as America did not realize how good professional sports could be until athletes of all colors could play, American business will not maximize its growth potential until all businesses have an equal opportunity to compete on an even playing field, where the rules are public and the goals are clear,” said Jackson. “That is the goal of the Wall Street Project.”