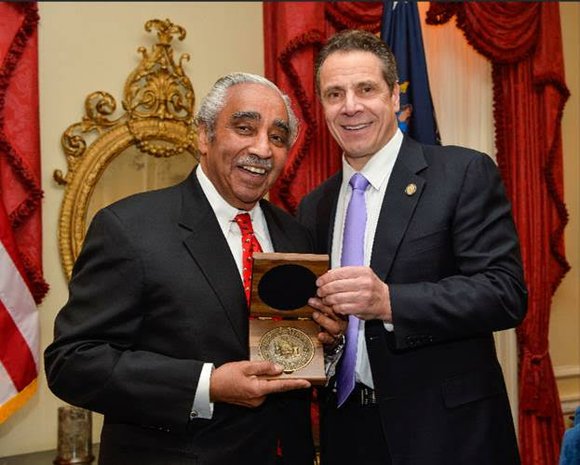 In presenting the medal, Cuomo said, “Congressman Rangel—in the words of Rev. Dr. Martin Luther King Jr.—brought justice to society. He helped those without power achieve equal rights. He practiced what he preached by delivering in deeds, and not just in words. That is what has made him an extraordinary leader, a man who has inspired many, and a man who has inspired and continues to inspire me. It is my pleasure to give Congressman Rangel the Governor’s Medal for Outstanding Public Service.”

“All my life, I tried to live by Saint Matthew’s teaching to be a stalwart champion for the ‘least among us,’” said Rangel. “I am honored to be recognized by the governor before my friends and those who are advocating powerfully and persistently to improve the lives of working families in our great state. I may be retiring from Congress soon, but I will never stop fighting for the voiceless and the powerless.”

Rangel, who grew up on Lenox Avenue in Harlem, was transformed from a high school dropout to war hero after volunteering for service in the U. S. Army during the Korean War, where he earned a Purple Heart and the Bronze Star for valor after leading his surviving comrades from behind enemy lines.

With the aid of the G.I. Bill, Rangel earned degrees from New York University and St. John’s University Law School. He began his public service as an assistant U.S. Attorney for the Southern District of New York and was later elected to the New York State Assembly. He went to Washington in 1971 to serve in the House of Representatives after defeating the legendary Congressman, Adam Clayton Powell Jr. A founding member of the Congressional Black Caucus, he made history as the first African-American member of Congress to lead the powerful Ways and Means Committee. Now serving his 23rd term in the House of Representatives, he has been cited as one of the most effective lawmakers and hardest working legislators in Congress. He was the primary sponsor of President Barack Obama’s Affordable Care Act, and contributor on other important legislation, including the creation of empowerment zones, low income tax credits, expansion of earned income tax credits, work opportunity tax credits and the African Growth and Opportunity Act.

The inscription on the Governor’s Medal of Public Service, which was uniquely awarded to Rangel, states, “For your enduring crusade for justice—from harrowing valor in the Korean War to giving a voice to the voiceless during your decades in Congress. Your public service exemplifies the values of New York State and our citizens.”