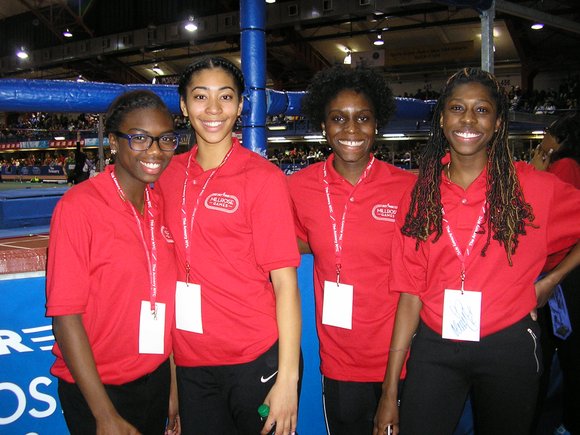 It is an Olympic year and track and field athletes are gearing up early. Even names typically absent from indoor season are testing their times. Olympic and world champion Allyson Felix headlines the women’s 60-meter dash at the 109th NYRR Millrose Games, taking place this Saturday at the Armory in Washington Heights. It will be Felix’s first Millrose appearance in 11 years.

“When I go to New York for the Millrose Games, I get a two-for-one. I get to do something I love, competing and racing, and I also get to see so much family,” said Harrison, a gold medalist in the 100-meter hurdles at last summer’s Pan Am Games. “I’ll have a pretty big group out there. That makes Millrose that much more special for me.”

Harrison, 27, did both the 400-meter and 100-meter hurdles in college and competed in the 400 at the 2008 Olympics. Currently training in Phoenix with a new coach, she is focusing on the 100 (60 meters for indoor events) heading toward the Olympics in Rio. She anticipates resuming the 400 at a later date.

Harrison, who considers herself a performer, has competed at Millrose previously and knows about the crowds at the Armory.

“It’s very seldom you get to compete in an atmosphere where there are competitors of all different ages,” said Harrison, who promises to bring speed and glamour to the track. “When you go to the Millrose Games, you’ll see some youngsters and college athletes in addition to the pros. It’s always cool because you get to see the present competitors and you get to see the future of the sport.”

She added, “The crowd is always so enthusiastic. When you’re in an atmosphere like that, it’s hard not to do well.”

Two-time 800-meter winner Ajee Wilson from New Jersey will try for a three-peat. Twins Miki Barber and Me’Lisa Barber, local favorites, will be running in the 4x200 relay several hours before the marquee events. Miki Barber, who recently posted some excellent times in the 60 meters, hopes she’ll get to do the 60 meters if a lane opens up.