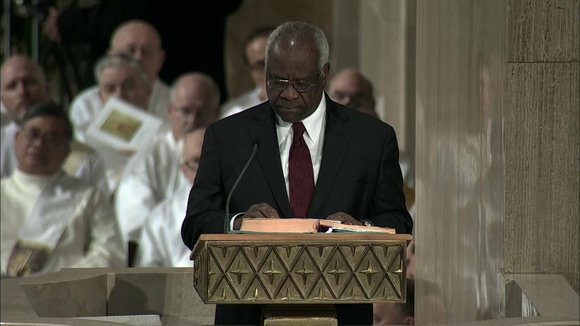 Justice Clarence Thomas gives a reading during the funeral Mass for late Supreme Court Justice Antonin Scalia at the National Shrine of the Immaculate Conception in Washington on February 20, 2016. CNN photo

WASHINGTON (CNN) -- Justice Clarence Thomas' deep and unwavering voice filled the Basilica of the National Shrine last Saturday as he delivered a reading from the Book of Romans at the Mass celebrating his close friend, ideological soul mate and occasional defender, the late Justice Antonin Scalia.

At Court, Thomas and Scalia sat next to each other on the bench, but on Monday, when the justices return from their winter recess, Scalia's seat will be draped in black. It will stay that way for 30 days, and then will be removed all together, and the justices will change seats to reflect the new order of seniority.

At oral arguments, Scalia and Thomas had radically different styles. Scalia was vocal from the bench, peppering advocates with questions, while Thomas, in recent years, silently listened.

It's been ten years, to be exact, since Thomas asked a question at oral arguments.

Scalia has defended his colleague's silence, and asked enough questions for the both of them.

In 2012, he told CNN's Piers Morgan that when he was a young lawyer he appeared before the Justices as an advocate and was only asked two questions.

"It was not at all unusual for justices not to ask questions," Scalia said.

In addition to friendship, the two men also shared the conviction that the Constitution should be interpreted according to the original intentions of the drafters. So called "originalism" was a cornerstone of Scalia's judicial philosophy, and will be a big part of his legacy.

"When Thomas took the bench, Scalia felt like he was the first line of reinforcement after years of fighting alone in the trenches to defend the original understanding of the Constitution," said Carrie Severino, a former clerk for Thomas.

"Neither Justice Samuel Alito, nor Chief Justice John Roberts have the same level of commitment to the theory," she said.

In 2013, Thomas gave a lively interview to Judge Diane S. Sykes, a federal judge on the U.S. Court of Appeals for the Seventh Circuit at an event sponsored by the conservative Federalist Society. Justice Scalia was in the audience.

"My closest ally and friend when I got there was Justice Scalia," Thomas told the audience.

"At the expense of embarrassing him," he said, " I can honestly say that as beat up as I was when I got there with the workload, I don't know how I would have gotten through it, if he hadn't been there," Thomas said.

Thomas acknowledged that while they didn't agree on every case, they agreed quite a bit.

Severino points out that one difference is that Scalia was more willing to build on the foundations of decisions even if he thought they were wrongly decided. The legal principle is called "stare decisis" and Thomas isn't a fan.

"Stare decisis doesn't hold much force for you?" Sykes asked.

"Not enough to keep me from going to the Constitution," Thomas shot back.

Last term, Thomas and Scalia agreed 78% of the time in full , in part or in judgment, according to statistics compiled by Scotusblog. That's less than Justice Ruth Bader Ginsburg and Justice Stephen Breyer, who agreed 94% of time.

After a decade, will Thomas remain silent?

It's not clear how or whether the absence of Scalia could affect Thomas, or whether it might entice him to take a more vocal role in court arguments.

Political scientist Timothy R. Johnson, a professor of law at the University of Minnesota, says that according to his data, over the last 45 years every other justice has asked at least one question during the course of a term.

"Even in the early 1970's, when justices were not asking many questions in general, everyone at least spoke up from time to time, Johnson said.

Three years ago, Thomas sent the Supreme Court press corps into a frenzy when he said something into the microphone, but the chattering class later determined that Thomas was not asking a question, but cracking a joke after something Scalia had said.

It appears to have become almost a point of pride for Thomas, especially in later years as the Roberts Court has become an increasingly hot bench with justices interrupting not only the advocate appearing before them, but each other. Sometimes Chief Justice John Roberts appears caught in the middle and acts as a traffic cop to bring order to the bench.

"To an extent that's unusual even in this Court, you have been listening rather than talking," Roberts told one advocate during a particularly tense argument concerning lethal injection last term. Roberts granted the lawyer more time to make his case.

Over the years Thomas has offered a variety of reasons for his silence from the bench.

"We have a lifetime to go back in chambers and to argue with each other," Thomas said in 2013 according to the Associated Press. He noted that the lawyers only have about 30 minutes to present their side of the case. "They should argue. That's a part of the process." Thomas said and added that he doesn't like to "badger people."

Although Thomas doesn't speak at oral arguments, he does not hold back in other contexts. He reads his opinions from the bench and keeps an active speaking schedule when the Court is not in session. And of course he was the Justice, presumably chosen by the Scalia family, to be a lector at the funeral of his former benchmate.