Glynn Washington adding diversity to radio one story at a time 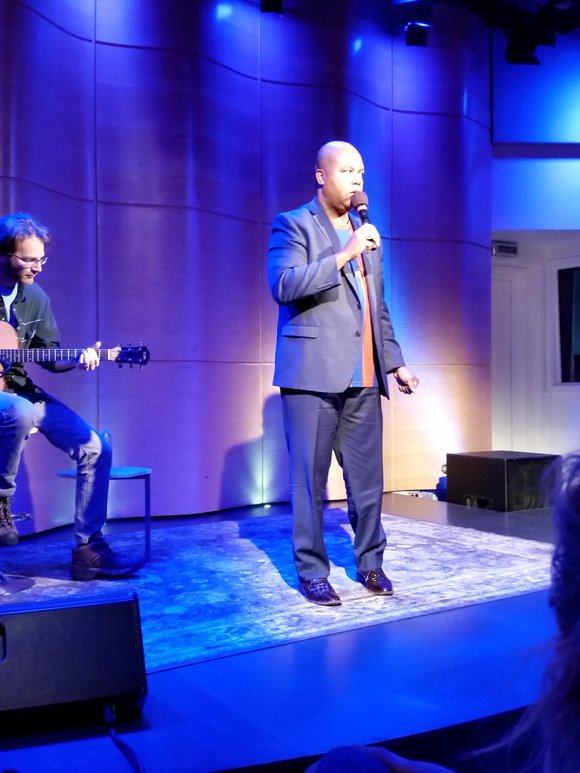 There were about 50—give or take—of us sitting in the intimate room of the Greene Space earlier this month. When the lights dimmed, anticipation filled the room. A man got on stage with his guitar and began playing some riffs. Shortly thereafter, the man who we were all waiting for, Glynn Washington, walked out from behind the stage. He was wearing a polyester T-Mobile shirt under a suit jacket—I knew I was going to like this guy.

Washington is the host of “Snap Judgment.” The widely popular podcast on WNYC is an hour-long weekly program that centers on storytelling. And that night, we were experiencing it live. He is one of WNYC voices of color, which challenges the overt whiteness of public radio both on air and across audiences. His popularity and diverse listenership proves that in order to reach more than just the 50-year-old white males of America, you have to bring in people with actual melanin—not just whites who think they can report on things affecting ethnic neighborhoods because they studied it in college or they’re Democrats. It’s dramatic, it’s funny and sometimes there are life lessons—what they are depends totally on what you take away from the story.

“Especially in this age with the current political situation, what we’re suffering from … is an empathy gap,” said Washington. “We can’t imagine what it’s like to hold a different view or to be a different gender, and the reason why I think storytelling is magic is because it’s a kind of telepathy.”

On this night, Washington opens up about his childhood in Pasadena, Calif., which was spent in the now infamous Worldwide Church of God, headed by the apocalyptic radio evangelist Herbert W. Armstrong. Many, including Washington, called the church a cult.

I don’t know how this is possible, with the sadness and seriousness that was woven throughout the story, but laughter erupted in the room. Here is this man telling us that when he was a 9-year-old, he was going to school and telling his best friend goodbye, sleeping in shoes and trying to get right with Jesus so that he wouldn’t perish in the rapture. He was surrounded by adults who were doing the same thing. His family was almost convinced to send their lifesavings to Armstrong, then pick up and leave their home to follow this self-proclaimed prophet to a “safe place” before God’s rapture came, and we were all laughing. This is a true story, but we can laugh because it’s a part of his life that he has come to terms with. Now he is sharing it with us, so that we can take from it what we need or want.

There are universal lessons in Washington’s story. In this particular one, the idea of forgiveness, both of yourself and others, was obvious. It’s a bit daunting to say that you were in a cult, and if you’re a Black man, having to say that your Black family was following this delusional old white man, it’s even more daunting in some circles—especially in this racially charged time of America. At times, telling his story has caused some conflict with Washington’s parents, who are not thrilled about having that part of their life exposed.