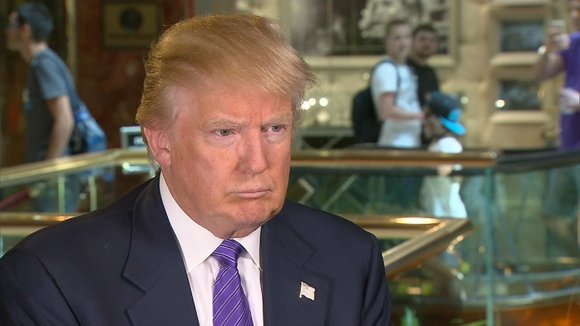 WASHINGTON (CNN) -- Donald Trump is trying to clean up a racially charged controversy Monday after he refused to disavow former Ku Klux Klan grand wizard David Duke over the weekend.

When asked about his comments on CNN's "State of the Union," Trump blamed a "bad earpiece."

"I was sitting in a house in Florida, with a bad earpiece," the brash billionaire told NBC's "Today" show. "I could hardly hear what he's saying. I hear various groups. I don't mind disavowing anyone. I disavowed Duke the day before at a major conference."

In the hours that followed Trump's original comments, the real estate mogul used Twitter to explain his remarks amid an outpouring of criticism from his Republican presidential rivals. Sen. Marco Rubio slammed the remarks, saying they make Trump "unelectable."

The Sunday uproar started when Trump was asked by Tapper whether he would disavow Duke and other white supremacist groups that are supporting his campaign.

"Just so you understand, I don't know anything about David Duke, OK?" Trump said.

Trump was pressed three times on whether he'd distance himself from the Ku Klux Klan -- but never mentioned the group in his answers.

"I think he deserves a close look by those who believe the era of political correctness needs to come to an end," Duke wrote.

He touted Trump's strength on immigration, breaking up "Jewish dominated lobbies and super PACS that are corrupting and controlling American politics," preventing war with Russia, exposing media "lies" and ensuring "that White-Americans are allowed to preserve and promote their heritage and interests just as all other groups are allowed to do."

The Anti-Defamation League had called on Trump to repudiate the support of Duke, the former grand wizard of the Ku Klux Klan, and other white supremacist groups.

Despite what he said Sunday, Trump apparently did know Duke in 2000 -- citing him, as well as Pat Buchanan and Lenora Fulani -- in a statement that year explaining why he had decided to end his brief flirtation with a Reform Party presidential campaign.

"The Reform Party now includes a Klansman, Mr. Duke, a neo-Nazi, Mr. Buchanan, and a communist, Ms. Fulani. This is not company I wish to keep," Trump said in a statement reported then by The New York Times.

He had also indicated he knew of Duke during a Friday press conference, when he was asked similar questions and said: "David Duke endorsed me? OK, all right. I disavow, OK?"

After his appearance on "State of the Union," Trump highlighted that Friday comment in a tweet, saying he does disavow Duke.