During sermon on violence, N.C. pastor confronts man with rifle 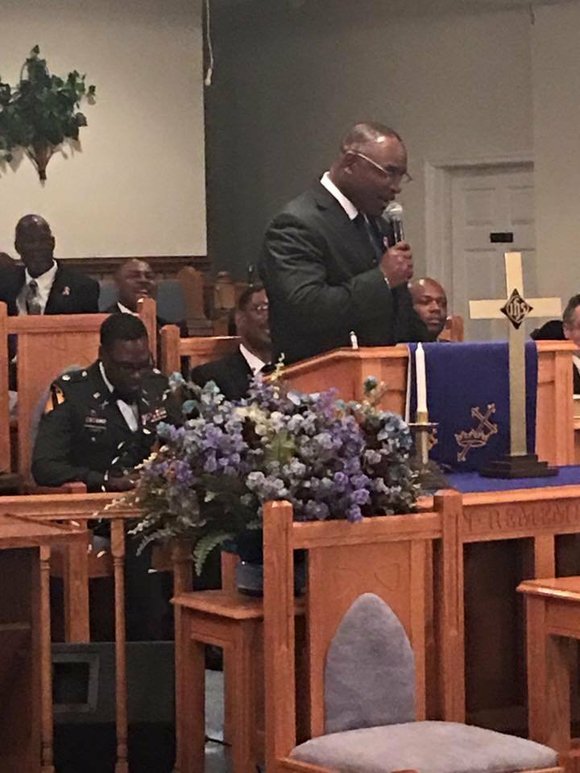 (CNN) -- Pastor Larry Wright was talking to his small eastern North Carolina congregation about the senseless deaths in his community when a man with a rifle walked into his church.

Wright, who leads the Heal the Land Outreach Ministries in Fayetteville, told CNN the man had a gun in one hand and an ammo magazine with shiny rounds in the other.

The glint made the retired Army sergeant first class recognize the weapon was real. Still, he was worried the man had one round in the gun.

"I'm the first person to see him and when I saw him, I thought it was a dummy gun, but then I saw the bullet clip in his hand and the bullets were shining," he said.

As first reported in the Fayetteville Observer, Wright said he walked up to the man and said, "Can I help you?"

Wright told the newspaper that if the man was antagonistic, he was going to use his 6-foot-2, 230-pound body to tackle the newcomer.

Instead, the man asked Wright to pray for him, the pastor told CNN on Saturday.

Man hands over his weapon

Wright took the rifle and handed it to a deacon. One by one, the deacon and three others hugged the man to make him feel loved.

"And then I began to minister to him and pray to him and talk with him," Wright said.

It was 20 minutes before midnight, and Wright wanted to finish the New Year's Eve sermon and do an altar call. He told the man to sit in the front row and stay there.

"I finished the message, I did the altar call and he stood right up, came up to the altar, and gave his life to Christ," Wright said. "I came down and prayed with him and we embraced. It was like a father embracing a son."

Wright whispered in the man's ear that police were waiting in the vestibule because he had scared a lot of people.

Intended to do something terrible

Then the man asked to speak to the 60 or so churchgoers. He apologized to them, telling them when he set out that evening he intended to do something terrible that night. But the Lord spoke to him, he said.

Wright described the gunman as emotionally distraught even though his life seemed to be on the upswing.

He told the pastor he had just gotten out of prison, had a new job and a new bride. The man looked to be in his late 20s or early 30s, Wright said.

Sylvester Loving, a 67-year-old deacon, told the Fayetteville newspaper that the church was talking about gun violence when the man entered.

"I think that night the spirit of God was definitely in the place," Loving told the Observer.

Wright said he was talking about "senseless deaths" in the community.

Allison Woods, a church member, told CNN she was at the back of the church when the gunman walked in.