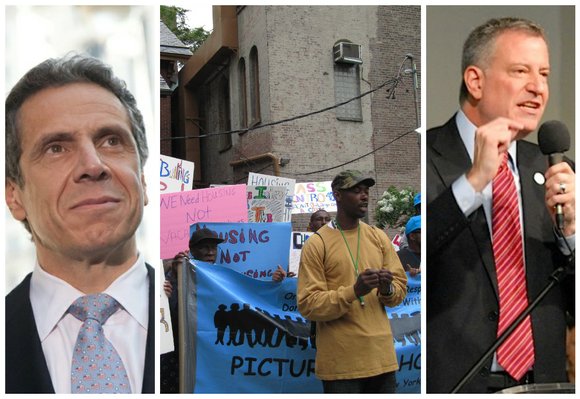 The homeless are usually stuck between the shelters and the streets. Now they’re stuck between Mayor Bill de Blasio and Gov. Andrew Cuomo.

In the battle to prove “I’m more progressive than you,” the mayor and the governor have attempted to one-up each other over who can help the homeless the quickest.

Monday, de Blasio announced a three-year plan to phase out and permanently end New York City’s program of putting homeless families into “cluster” shelter units (which has gone on since Michael Bloomberg’s first term). These cluster units are usually regular rental apartments in privately owned buildings that already have paying tenants. The mayor feels they should just be low-rent housing.

“The cluster homeless shelter system is broken and represents the worst combination of expensive housing, bad conditions and poor access to services that homeless families need,” said de Blasio in a statement. “Importantly, cluster shelters take badly needed low-rent apartments off the market. Now we have a solid, practical program for ending the use of clusters, returning apartments to the market and providing new shelters that are attractive for both residents and the communities in which they are located.”

De Blasio wants the units to either be converted into permanent housing or have residents move to another shelter by Dec. 31, 2018. In the meantime, Cuomo is looking to take care of the homeless issue now. With the city experiencing its first winter chill of the season, the governor signed an executive order to protect homeless individuals from inclement winter weather (when temperatures drop below 32 degrees) by putting anyone on the street into shelters.

When the governor spoke to Kathleen Marple on 1010 WINS earlier this week, he talked about compassion and not wanting the homeless to be left out in the cold.

“The holiday season is about compassion and love and helping one another,” said Cuomo. “And this state has always set the bar higher than other states, right? We passed laws in New York that no other state has. We passed marriage equality; we passed gun control laws that no other state has. So what we’re saying is that as people, as a society, we want to make sure that every New Yorker has a place to be sheltered and doesn’t have to be in the cold weather.

Marple also asked Cuomo if the homeless situation was a city matter or a state matter. Cuomo focused on the homeless and how they shouldn’t be left outside to freeze.

Cuomo also called it “unacceptable” that some of the homeless might not want to go into the shelters because it’s dangerous.

The AmNews contacted de Blasio’s camp for comment on Cuomo’s action but still hasn’t heard back from him. However, spokeswoman Karen Hinton told the New York Daily News that they support the intent of Cuomo’s executive order but “to forcibly remove all homeless individuals in freezing weather, as the governor has ordered, will require him to pass state law. This executive order adds no legal or financial resources to New York City’s programs to assist the homeless, and merely requires all New York state localities follow many of the same requirements as New York City to shelter families and individuals in need in freezing temperatures.”

But has anyone asked what the homeless think of Cuomo’s moves?

Sheila Turner, a member of Picture the Homeless, told the AmNews that the homeless are being treated like animals.

“Putting people in shelter is like putting them in a cage,” said Turner. “You can’t imagine the things that have happened to people in there. How they’ve been hurt. Homeless people need housing, their own place. Not someone telling them when to sleep and what to eat. I’ve been on the street for 30 years so I know how it is—we’re living with the mistakes that past mayors have made, all the handouts to landlords that made this city unaffordable—but this mayor and this governor aren’t helping.

Turner also said that all of the efforts de Blasio and Cuomo are engaging in to “out-progressive” the other has people like her feeling even more insecure and uncared for.

“Media talks about homeless people being dangerous, being criminals. Well, if the cops leave us alone, we’ll be alright,” said Turner. “But now you’ve got trigger-happy police messing with us all the time, waking us up every five minutes, so we’re walking around sleep-deprived, throwing away our possessions. This executive order will just put more cops in our face, give them new ways to mess with us, and that won’t help the situation. The mayor and the governor keep pushing us, but we’ve been pushed too far. And we’ll fight back.”

Turner and Picture the Homeless have a friend in VOCAL-NY, an organization that’s been critical of the mayor in the past. This time, their criticism was directed at Cuomo.

Jeremy Saunders of VOCAL-NY said that what Cuomo is doing is “yet another attempt to play politics with the homeless when, in fact, he knows what he needs to do is put up money to fund supportive housing. We’ve had a steady decline in homeless rental vouchers and we need to see that go up as well.”

“At this point, it seems really overt,” said Saunders. “The governor just appears to spend more political capital attacking the mayor instead of making good policy.”

Saunders also credited de Blasio with attempting to do things like “Home-STAT” to chronicle homelessness in the city even though they don’t agree with everything he’s doing concerning their constituency.

Homeless New Yorkers lost out during the Bloomberg administration and are now being used as political football in a rivalry between two elected officials. Meanwhile, de Blasio’s camp put out a release crediting the mayor’s efforts to help homeless veterans as partly responsible for the federal government announcing that it has effectively ended chronic homelessness among those who served.

“The brave women and men who valiantly protected our nation abroad should never be left without a home,” said de Blasio in a statement. “Today, we have ensured that those in the veteran community who have struggled to find and remain in housing time and time again will have a stable place to call home.”