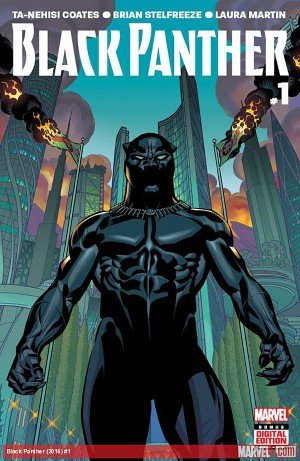 The level of talent in the African-American community is about to get a major, global jolt in the arm, and it’s all about “the new Black Panther.”

In the comic book world, the news is high as the first issue of Ta-Nehisi Coates and Brian Stelfreeze’s much-anticipated “Black Panther” series has been set to bow in April and is priced at $4.99. The “Black Panther” series is written by MacArthur Genius and National Book Award winner Coates (“Between the World and Me”) and illustrated by living legend Stelfreeze.

Marvel Comics released a statement from series editor Will Moss to keep the curious fans active on social media.

“Ta-Nehisi, Brian, colorist Laura Martin, letterer Joe Sabino, assistant editor Chris Robinson and I have been working on this series for months already, so we’re happy to have a launch date as we’re all anxious to start getting this book out in front of people. We may be biased, but we think it’s something pretty special!”

The genius team behind the billion-dollar Marvel franchise world knows talent when they see it. To that end, Marvel’s upcoming “Black Panther” movie has been the “one to win,” with many elite directors vying for the big budget film

In a recent statement, Marvel Studios President Kevin Feige confirmed that “Creed” director Ryan Coogler, who had been in long talks to direct “Black Panther,” will now officially helm the project.

No stranger to the careful development of franchise properties, Feige commented that the Black Panther character is important because of his influence on the upcoming Avengers films, “Infinity War Parts 1 and 2.” “Not only do you get an unbelievable lead character, but you also get all of Wakanda, which is a whole new setting and culture to explore,” he said.

Feige also noted that the movie would feature a “majority Black cast,” but as of this file date, the only confirmed cast member to lock a lucrative contract is Chadwick Boseman as T’Challa. The movie is set for release on July 6, 2018.

The first issue of “Black Panther,” “A Nation Under Our Feet,” is a story about dramatic upheaval in Wakanda and the Black Panther’s struggle to do right by his people as their ruler. The indomitable will of Wakanda—the famed African nation known for its vast wealth, advanced technology and warrior traditions—has long been reflected in the will of its monarchs, the Black Panthers. But now the current Black Panther, T’Challa, finds that will tested by a superhuman terrorist group called “The People,” which has sparked a violent uprising among the citizens of Wakanda. T’Challa knows the country must change to survive. The question is, will the Black Panther survive the change?