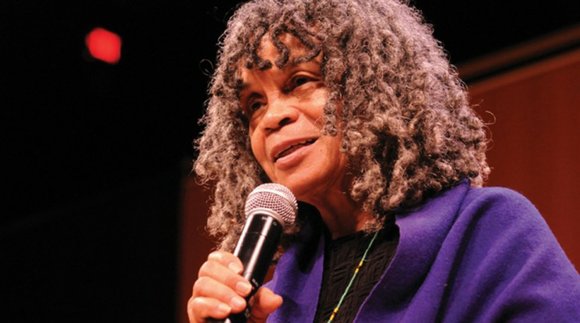 ADIFF 2015 Closing Night film “BaddDDD Sonia Sanchez” will be one of the highlights of the “Best of ADIFF” program to be held at Teachers College, Columbia University from Friday, Jan. 8 to Sunday, Jan. 10.

“BaddDDD Sonia Sanchez” won ADIFF 2015’s Public Award for the Best Film Directed by a Woman of Color. Director and editor Sabrina Schmidt Gordon will receive her award on Saturday, Jan. 9 at 8:30 p.m. during an award ceremony to be followed by the encore screening of the film, a Q&A with the director and reception.

“BaddDDD Sonia Sanchez” is a performance-filled documentary about Sonia Sanchez, poet, playwright, activist, seminal figure in the 1960s Black Arts Movement and mentor to generations of poets and hip-hop artists. For the legendary 80-year old artist, writing is both a personal and political act.

Other films in the “Best of ADIFF” include ADIFF 2015 Opening Night film “The Man Who Mends Women, The Wrath of Hippocrates” by Thierry Michel, which tells the story of Dr. Denis Mukwege, a man who has dedicated his life to assist women subjected to rape in his native Democratic Republic of the Congo.

ADIFF 2015’s Centerpiece screening “Cu-Bop: Cuba – New York Music Documentary” by Shinichi Takahashi is a documentary for all music lovers that explores the African roots of Cuban jazz and documents what happens when expats return to the source of their inspiration, will also be part of the selection.

Returning for the “Best of ADIFF” are several films that explore historical themes, including “If Only I Were That Warrior” by Valerio Ciriaci, ADIFF 2015 Gala Screening, which moves in and out of Ethiopia, Italy and the United States to tell us a story of unpunished war crimes, colonial wars and African history; “Invisible Heroes: African Americans in the Spanish Civil War,” by Alfonso Domingo and Jordi Torrent, which introduces us to the remarkable story of African-Americans who fought as volunteers in Spain for democracy and for civil rights that were denied to them in their own country; and “The Blind Orchestra” by Mohamed Mouftakir, a humorous yet critical look at the life of a group of musicians in Morocco during the early years of the reign of Hassan II.

Two films presented in the “Black British” program made the cut for the “Best of ADIFF”: Honeytrap by Rebecca Johnson, which tells a story of 15-year-old Layla (Jessica Sula, “Skins”), a beautiful and naive Trinidadian girl who, freshly arrived from her native land, quickly embarks on a journey of love, sex, hip-hop and violence, and “Second Coming” by Debbie Tucker Green, an emotional and intimate drama about a woman in a London family who faces a dilemma with her husband (Idris Elba) and the tensions and communication issues associated with her situation.

Rounding up the selection is “Hear Me Move” by Scottnes L. Smith. Labeled the first Dance Movie of South Africa and featuring cameo appearances by South African stars Amanda Du Pont, Boity Thulo and Khanyi Mbau, “Hear Me Move” received huge popular acclaim last year in its home country and was one of the most popular films of ADIFF 2015.

For more information about the “Best of the African Diaspora International Film Festival,” visit www.nyadiff.org.