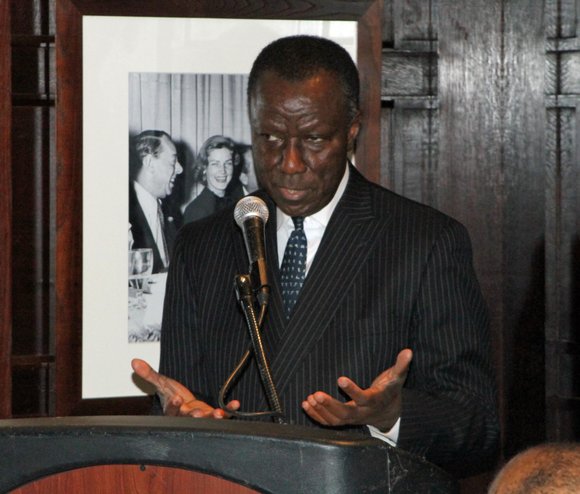 Through Ambassador Tekeda Alemu’s goodwill and advocacy, the newly founded Cultural Center of African art is on track to build a state-of-the-art center in Brooklyn. Alemu facilitated the initial funding by an African government leader and subsequently gained the financial support of the New York City Council.

Edwards has one of the largest collections of African arts and artifacts of any individual, totaling more than 3,000 pieces. His collection has been featured by CNN, NBC, the New York City affiliate of ABC, The New York Times and several other TV and print media outlets.

Nurhussein said, “Our twin organizations have been aware for some time of the value and immense potential of Mr. Edwards’ vast collection of African art. As Pan-African organizations, we have been collaborating with him to make his dream of disseminating and educating the culture and proud history of Africa, not only to African-Americans, but the public at large.”

In addressing the gathering, Edwards highlighted the museum’s mission statement, which states in part, “to educate and inform all people of the world through its artifacts collection, within a cultural context of Africa’s importance.”

The Eric Edwards Cultural Museum of African Arts is promoting African culture and its value systems as it strengthens its ties between Africa and the U.S. through Edwards’s magnificent African artifacts collection. This museum will not only bridge the great divide between Americans of African ancestry and their culture, but also serve as a pivotal point for accepting and embracing self-pride while dispelling the myths. As an African proverb states, “No instruction can take effect if there is dislike.”