Cuomo criticized at State of the State address

Gov. Andrew Cuomo announces several new initiatives during his 2016 State of the State address in Albany on Wednesday ranging from improving conditions for the homeless to decreasing unemployment.

The governor unveiled his $145.3 billion budget and said New York State’s economy is on the “rebound.” He touted achievements the nation has modeled including passing the marriage equality act, strengthening laws for sexual assault on college campuses and common sense gun laws.

While Cuomo was going down the list of his highlights during his speech, Brooklyn Assemblyman Charles Barron called from the audience that Cuomo hasn’t done enough for New York’s most poverty stricken neighborhoods. [Click here to see the video] 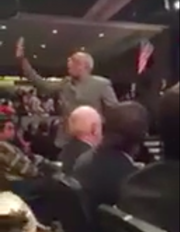 Assemblyman Charles Barron chastised Gov. Andrew Cuomo during the State of the State address about not giving enough money to poor neighborhoods.

Barron represents Brooklyn’s East New York neighborhood, which is among one of the state’s poorest. He wants Cuomo to propose millions of dollars to the community in need.

Reports indicate that Barron planned to interrupt the governor during his speech. In a statement released on social media on Wednesday, Barron said due to the campaign for fiscal equity court mandate, the state owes $4.8 billion to public school children and 70 percent of the overdue funds are to be allocated to high-need schools. He said his district in particular is due $28 million.

“I am sick of the hypocrisy and neglect displayed by the governor towards our most needy,” Barron said in the statement. “I refuse to sit and watch him make claims and statements that are backed by insufficient actions. Governor Cuomo needs to take a stand and put the money where his mouth is.”

Cuomo mentioned Black male unemployment and current solutions in place, particularly in the Bronx, where job vouchers are being used in the private sector. The governor is allotting $55 million that would create 10,000 jobs.

Adding to that was the topic of living wage. Cuomo noted that over half million people in the state are living in poverty and wants to continue his plan to raise the minimum wage to $15 and hour.

One of the highlights of his address was his $20 billion proposal to reduce homelessness in the state. The money would be divided for affordable housing, supportive beds and fixing dysfunctional shelters.

State Comptroller Tom DiNapoli will audit homeless shelters. Those that aren’t doing well will either be shut down or get more police security.

As far as education, Cuomo said he’s proposing $100 million to transform failing schools into community schools. He discussed the school to prison pipeline blaming failing schools as a factor in filling the state’s prisons.

In a statement from the Alliance for Quality Education (AQE), the advocacy group says Cuomo’s budget plan isn’t enough to fix the problem.

“The idea of converting struggling schools into community schools is a great idea, but we need to see if the reality meets the rhetoric,” sadi AQE executive director, Bill Eaton. “Last year the Governor provided $75 million for 20 of these schools, this year he only promised $100 million for 124 schools so the numbers do not quite add up.”

On the topic of MWBE’s Cuomo said many smaller communities in the state do not have an MWBE plan. He’s proposing that current state MWBE goals apply to local government contracts.