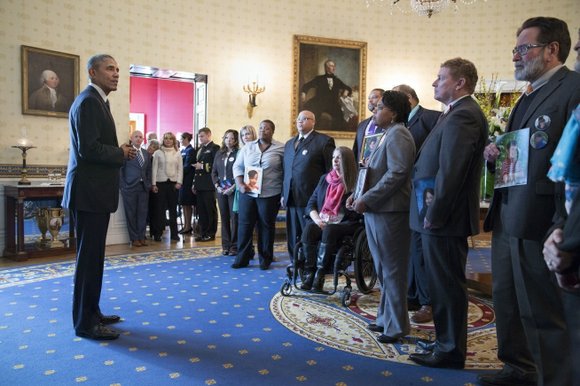 The late Shirley Chisholm used to declare that she was “unbought and unbossed.” President Barack Obama might state that he is “unfazed and unflappable.”

It has taken a special kind of leader to withstand such a relentless, brutal attack over the last seven years and still remain unperturbed despite the recent tears during his remarks on gun violence as he has. This was particularly noteworthy during his final State of the Union address.

Some of our friends and associates continue to be amazed at his resilience, his ability to ward off the unwarranted attacks, the false accusations, the persistent resistance from every niche and sinecure. “I will be glad when his term in the White House is over,” one supporter has repeated to us on numerous occasions.

That wish for his departure is more one of mercy than disgust, though we have our share of disappointments we can register. Obama has withstood barrage after barrage of naysaying, name-calling and downright ornery vituperations, yet he has refused to snap back at his adversaries, keeping a calmness and resolve reminiscent of Jackie Robinson.

And in many respects, Obama has been like Robinson given his tenure at the top of the nation’s government, taking nearly every incredible knock a politician can possibly endure. His way of absorbing his enemies’ blows is akin to the punches Muhammad Ali took during his championship bouts. Unlike Ali, however, Obama is not a Muslim, even if a third of the nation’s citizens believe he is. And he is an American citizen, we say again to those determined, wrongheaded “birthers.”

President Obama, it has been a good ride, and although you still have a few more months in office, we are proud of your record, and this is a particularly amazing run when you consider the fight you had to wage to get a few of your ideas accepted. Your legacy is assured with your Affordable Care Act, your stance on climate change, your resuscitation of the nation’s economy from the pit of recession, the improved numbers on unemployment, the normalization of diplomacy with Cuba and even for the dreams that were not fulfilled.

We will have more to say about this in our future editorials, knowing—and certainly hoping—that you still have some more steps to take, a few more rabbits to pull from your hat.

By the way, we loved your invocation of Dr. King in your final State of Union address—that was vintage Obama, the kind of oratorical magic, the historical resonance that gave us such great hope and promise in 2008 and continues with us as you near the end of your days in the White House.