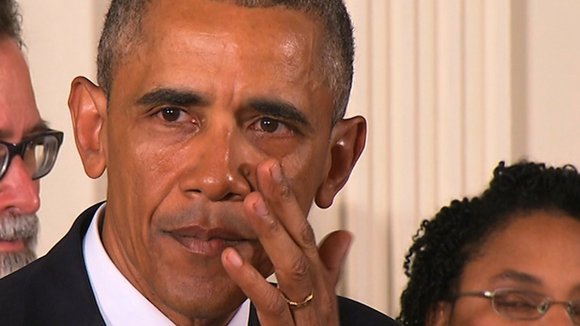 President Barack Obama grew emotional Tuesday as he made a passionate call for a national "sense of urgency" to limit gun violence. He was introduced by Mark Barden, whose son Daniel was killed in the 2012 massacre at Sandy Hook Elementary School in Connecticut. Obama circled back to that shooting in the final moments of his speech. POOL

It’s been less than two weeks into the new year and President Barack Obama intends to tighten gun control laws across the U.S.

“If we can combine gun safety with sensible background checks and some other steps, we’re not going to eliminate gun violence, but we will lessen it,” Obama said last Tuesday in a press release sent to the AmNews.

According to the Mass Shootings Tracker, a firearm archive maintained by a Reddit group, 372 mass shootings occurred in the U.S. in 2015, killing 475 people and wounding 1,870. Last year, nine congregants were slaughtered at Emanuel AME Church in Charleston, N.C., 10 students were shot in classrooms at Umpqua Community College in Roseburg, Ore., and three patients were killed while awaiting health services at a Planned Parenthood center in Colorado Springs, Colo. These incidents make up more than 30,000 gun violence deaths across America, according to a 2013 report published by the Centers of Disease Control and Prevention.

“When white people are being killed, it’s a crisis,” Barron said. “Gun violence has been happening in Black neighborhoods for a long time."

The 10-step initiative to combat gun violence includes increased access to mental health services, reporting theft and loss guns, background checks and improved gun safety technology. According to Barron, this executive action is flawed for low-income neighborhoods, where guns are smuggled from the South and illegally traded between street gangs.

“These laws are not applicable to what’s happening in the Black and Brown urban communities,” Baron said. “You don’t see a lot of assault weapons in New York state … our problems are drugs, guns and poverty. There is a correlation with poverty, unemployment and racism with violence that [is] not addressed.”

A heightened crime rate throughout East New York has left nearly half of the residents in poverty, according to a crime and safety report released by DNAinfo.com. A lack of sustainable housing, an increased reliance on illegal income and low access to academic youth programs have contributed to these rising statistics.

“Recognize gun violence as a public health crisos,” Williams said. “You have to separate it out into two fields, one is supply and one is demand, with the discussion about sensible gun legislation … it helps address the supply of guns into the community.”

Barron proposes “humane” domestic and foreign legislation that is inclusive of the Black community.

“There is no safe place in America,” Barron said. “We are in a crisis state, and we as a people need to rise up and organize ourselves.”

According to Williams, this year the City Council hopes to implement a budget of more than $100 million to provide summer employment opportunities for youth.

“Every single child that applies for a job can have one,” he said. “We constantly leave everything up to the Police Department, and they can’t solve all these problems.”