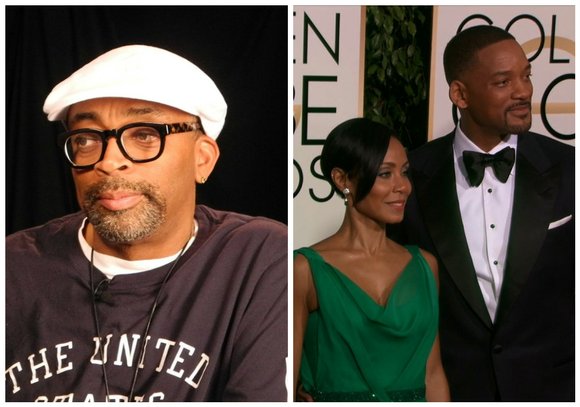 (CNN) -- Invoking the Rev. Martin Luther King's legacy on his birthday, two prominent African-Americans announced Monday that they will boycott this year's Academy Awards over a lack of diversity among nominees.

Filmmaker Spike Lee and actress Jada Pinkett Smith posted separate messages Monday saying they would not be attending the February 28 ceremony. The Oscars have drawn criticism after an all-white slate of major nominees was announced Thursday for the second year in a row.

"We cannot support it and [I] mean no disrespect ... But, how is it possible for the second consecutive year all 20 contenders under the acting category are white? And let's not even get into the other branches," Lee wrote on Instagram. "Forty white actors in two years and no flava at all. We can't act?! WTF!!"

"Dr. King said, 'There comes a time when one must take a position that is neither safe, nor politic, nor popular, but he must take it because conscience tells him it's right,' " continued Lee, the outspoken director of such racially charged films as "Do the Right Thing" and "Malcolm X."

Lee said the " 'real' battle" over racism in Hollywood is not with the Academy Awards but in "the executive offices of the Hollywood studios and TV and cable networks," where gatekeepers decide which projects get made and which don't.

"People, the truth is we ain't in those rooms, and until minorities are, the Oscar nominees will remain lilly white," he wrote.

In a video posted to Facebook, Pinkett Smith said she would not even watch the Oscars on TV this year. Her husband, Will Smith, had been considered an Oscar contender for his role in "Concussion" but was not nominated.

"Today is Martin Luther King's birthday, and I can't help but ask the question: Is it time that people of color recognize how much power, influence, that we have amassed, that we no longer need to ask to be invited anywhere?" she said.

"Begging for acknowledgement, or even asking, diminishes dignity and diminishes power. And we are a dignified people, and we are powerful," she said. "So let's let the Academy do them, with all grace and love. And let's do us, differently."

"#OscarsSoWhite" trended on social media last week after a number of black Oscar hopefuls, including "Beasts of No Nation's" Idris Elba; "Creed" star Michael B. Jordan; that movie's writer-director, Ryan Coogler; and the cast of N.W.A biopic "Straight Outta Compton" were overlooked by academy voters.

The Academy of Motion Picture Arts & Sciences has faced years of criticism that its 7,000-plus members who vote on the Oscars are mostly older, male, white and out of touch with today's moviegoers.

Academy President Cheryl Boone Isaacs, who is black, said over the weekend that she was "disappointed" by the Oscar nominations.

"But this is not to take away the greatness" of the nominated films, she told Deadline. "This has been a great year in film, it really has, across the board. You are never going to know what is going to appear on the sheet of paper until you see it."

Still, Isaacs acknowledged that the academy's efforts at boosting diversity among its membership and throughout Hollywood were moving too slowly. "We have got to speed it up," she said.

A longtime critic of the academy, Lee received an honorary Oscar at a banquet in Hollywood in November, where he said, "This industry is so far behind sports, it's ridiculous. It's easier to be president of the United States as a black person than be head of a (movie) studio. Honest."

Next month's 88th Academy Awards will be hosted by black actor-comedian Chris Rock, who has largely remained quiet about the #OscarsSoWhite controversy. Friday on Twitter, however, Rock referred to the show as "the white BET Awards."