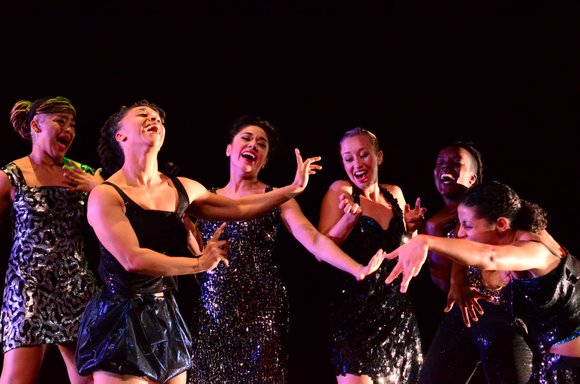 In silhouette, accompanied by a soft hum, repeating, reaching and curving from one long limb to the other, Channon Judson’s arms, legs and torso wafts through the space for the opening of Urban Bush Woman’s “Walking With ’Trane” at BAM Harvey (Dec. 9-12). “Walking With ’Trane,” a premiere, is choreographed by Artistic Director Jawole Willa Jo Zollar, company member Samantha Speis and in collaboration with other company members Du’Bois A’Keen, Amanda Castro, Courtney J. Cook, Chanon Judson, Tendayi Kuumba, Stephanie Mas and understudy Love Muwwakkil.

This homage, inspired by the life and work of legendary jazz saxophonist John Coltrane, was conceived as a concept album with a “side A” and “side B” for the stage, an intermission separating the two. The Coltrane-inspired score for Side A is composed by Philip White, and for Side B, George O. Caldwell is live on piano. Talvin Wilks is the dramaturg, lighting is by Russell Sandifer and video design is by Wendall Harrington.

“Walking With ’Trane” is sprinkled with Zollar’s signature UBW tenets. Adopt a meaningful stance and use all possible modes to make sure it is heard is just one. Here, Zollar and Speis use text (straight forward or abstracted), music (played, sung, vis-a-vis sound vibrations or hummed) and movement (grounded, stomping out soft or fast rhythms, but also swung out off-balance, sumptuous or caressing the air). Engrossed in telling Zollar’s story, the dancers match and capture intimate places in Coltrane’s complicated music at every turn.

In one movement-story, a knee lifts, the heel falls and is firmly planted, an undulating torso responds, finishing with arms wide, elbows bent and a soft jerk of the chin. In unison or in different pairings, their delivery is relentlessly confirming; Coltrane’s sounds are tangible.

Though unfair to single out any one of these brilliant artists, noteworthy highlights however go to Cook in her song and movement blend, Speis’ full-bodied plunge where she commands the space and Kuumba’s deep-seated cry. UBW’s Side A and Side B can stand alone, but how glorious they are together; the evening was a solid whole.

To end, among the many stunning visuals running on the back wall throughout (including memorable photos of Coltrane), handwritten notes from Coltrane’s signature album and a huge inspiration for this work, “A Love Supreme” slowly scrolls until the stage is dark. It reads: “Make ending attempt to reach transcendent level with orchestra … rising harmonies to a level of blissful stability.” Coltrane’s music is deeply emotional, and Zollar, Spies, Wilkes, Sandifer, Harrington and each dancer seduce us to the end. BAM was right to fill the Harvey with the sweet sounds of Coltrane and dead-on in bringing Zollar into the fold.