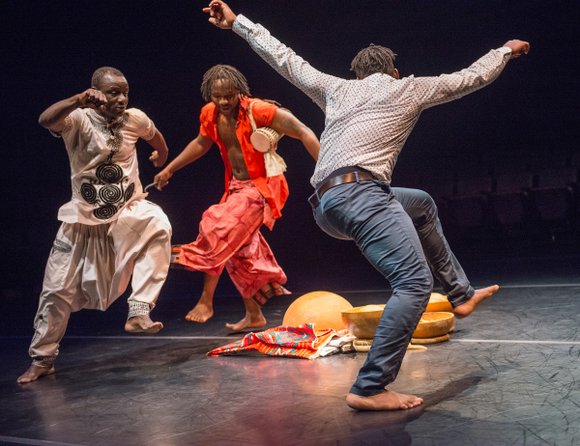 Specially commissioned for BAM Fisher (Dec. 2 to 5), Souleymane “Solo” Badolo’s “Yimbegre” is a dance for men and a journey about one—Badolo. In Moore, one of the indigenous languages of Burkina Faso, “yimbegre” means “beginning,” and for the Burkina Faso-born Badolo, this beginning constitutes revisiting his journey from Africa to the Americans and also a reckoning of what lies ahead.

For Badolo, dance is his vehicle. In fact, in a program note, Badolo posits, “We have immense riches to discover—riches revealed in the language of this movement and in the sounds of the drums … [of] my beautiful Brukina Faso, called the country of men of integrity, or dignified men.”

Beautifully framed with lights by Carol Mullins, the space is intimately organized in the round and sectioned off to highlight happenings in each of the four corners. From the start, master drummer Mamoudou Konate (also from Burkina Faso), who wrote original music, sat center-stage atop a gourd adorned by colorful prints while yet another overhead spilled a soft light over him.

Throughout, Konate plays the gourd/water drum/calabash and the West African talking drum. Soon, in “Western” clothes, Sylvestre Koffitse Akakpo-Adzaku (from Togo), enters and moves slowly in one corner for some time, encircling or making his space. Later, in another corner, it’s Badolo turn. In sharp contrast, gliding on flat feet, swinging his hips and flexing his wrists, Badolo is in “African” clothes.

Whatever the intention of this quickly passing notion of masculine versus feminine movement, we don’t know. Both are captivating. Eventually they come together, hoist and carry each other and play off each other’s moves, some Western and some African. As quickly as their movements come, slow and decisive, wide chest and equally wide arms demanding attention, it would change to fast foot work or really fast unison sequences prompted by Konte’s skilled sounds. Then it was gone. Throughout, the gourds claim space as a fourth performer, carrying water, giving off sounds (with or without water), balancing Badolo with wet feet or as control for the light.

The men come together toward the end in a laughter-filled conversation in many languages. In the program, Badolo explains that this section is “really a play on the dynamics that exist in their long-term friendship. They each have a different take on the expressions they are using—‘don’t eat hot peppers in my mouth,’ meaning don’t twist my words or don’t put words in my mouth or this is the sting of gossip.” Their dance of dialects grows louder and louder until they cover each other with water from the gourds and end with a repeating rhythmic chant.