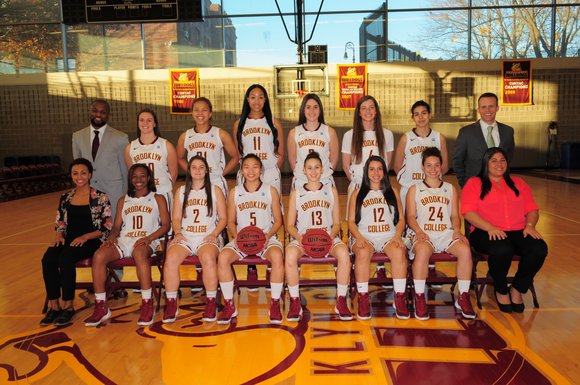 The Brooklyn College Bulldogs know what it means to be oh-so-close to winning it all. On three occasions in recent years, they finished in the runner-up spot at the CUNYAC women’s basketball championships, each time losing to Baruch. Hoping this will be their year to advance to the NCAA Division III National Championships, at press time the Bulldogs are undefeated in conference play.

“Our expectations going into the season definitely weren’t to be doing this well, so it’s really nice to be playing this well,” said head coach Alex Lang. “We lost seven seniors from last year’s team. We had a young team this year, and we weren’t quite sure how we would do in the conference. [We’re] kind of taking it game by game. Our players have shown a lot of toughness and skills.”

A big contributor is junior forward Olivia Colbert, a Brooklyn native who transferred to Brooklyn after two years at Monroe College in New Rochelle. Lang said she’s outstanding and may be the best player in the conference.

“She’s a very good rebounder, extremely strong hands, she jumps very well and she’s extremely strong,” Lang said. “[It’s] hard to knock her out of position for opposing players. She’s able to do a lot of good things around the basket. She does a little bit of everything.”

The Bulldogs’ leader in blocked shots is another Brooklyn girl, Maya Ajee-Thomas, who, at 6-foot-4, brings a presence in the paint. Her offense still needs some work, but her defense is strong.

The Bulldogs played some tough non-conference opponents, which helped them prepare for conference play. Lang said hopefully this shows they’re battle-tested and it will help them in the postseason. As the Bulldogs are without any seniors, they might not be fueled by a sense of urgency, but they definitely like winning.

“I try to recruit players who are committed to playing, and they’re going to make it their business to be at practices every day and make this their priority after their schoolwork,” said Lang. “They’re all buying into the same goal as a team.

“I don’t think they have much pressure on them. They’re kind of taking it game by game and enjoying the season we’ve put together so far. … If we keep playing well, we have a very good shot to win the conference.”