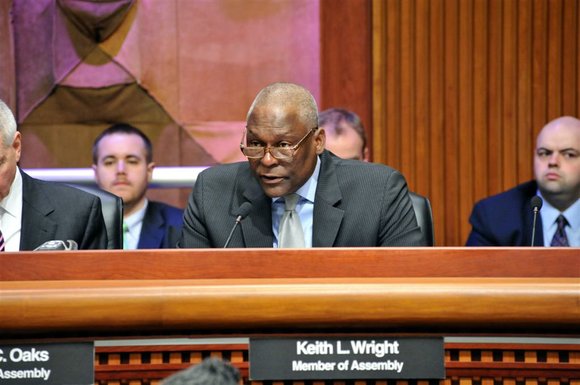 Endorsement season has picked up in the race for New York’s 13th Congressional District.

32BJ SEIU President Hector Figueroa referenced Wright’s work for the working class as reason for his endorsement. “Keith has always stood up for working men and women in our state,” he said in a statement. “He’s fought for good jobs and fair pay for New Yorkers and affordable housing, immigration reform that keeps families together and economic and educational opportunities for all.

“Our members know he will continue to fight for hard-working people like them in Congress.”

Wright has consistently been an elected official on the front lines with organizers advocating for fair pay and the right for workers to unionize. 32BJ SEIU officials noted that Wright voted in favor of the minimum wage raise in 2012 and sponsored the Domestic Workers Bill of Rights. This, on top of other reasons, has led to union officials promising to knock on doors and make calls to get out the vote in his favor this election season.

“Without our service industry workers, New York City would not be the vibrant city that it is—our doormen, our window cleaners, our security officers. But too many working families struggle to pay their bills and hold decent paying jobs,” Wright said in a statement. “32BJ knows that working families don’t have to be working poor. They are dedicated to raising the living wage and providing high quality jobs for all workers. I am honored to have the endorsement of 32BJ SEIU and look forward to working with them to continue to fight for our service employees.”