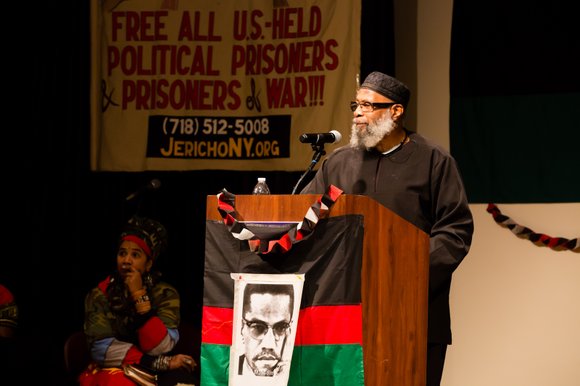 Last weekend’s 20th annual Black freedom fighter tribute hosted by the Malcolm X Commemoration Committee at 1199 proved to be that intense and more as they sought to honor 17 men who have served more than 800 years between them because of their involvement in the Black Panther Party thanks to that sinister covert government operation COINTELPRO that decimated the Black Liberation Movement in the late 1960s.

Eight hundred years! And that does not include those political prisoners who are not Panthers.

It was conceived by elder Iyaluua Ferguson, author of the well-written “Unlikely Warrior,” the memoir of her late husband, Herman Ferguson, MXCC’s founding chairman.

“It all started at the Harlem State Office Building under a blanket of snow 20 years ago,” recalled press officer Zayid Muhammad, the organization’s last surviving member. “We wanted to do something that specifically focused on our freedom fighters and their still underappreciated link to Malcolm, something their families could appreciate. We honored James Small and the late Gil Noble for their work honoring Malcolm.

“Within a few years, we would outgrow that space and go to Brooklyn to Restoration Plaza, where we have had most of our tributes. Our recent association with 1199 brought us back to Manhattan, and the rest is history.”

The moving milestone gathering garnered participants who travelled quite some distance to participate. Ferguson came up from North Carolina and joined the Jericho Movement’s chair, former political prisoner Jihad Mumiit, who came up from Virginia. Popular New York Panther cub Reggie Mason came down from Connecticut. Salim Adofo brought a squad of young activists from his Washington, D.C., chapter of the National Black United Front, while Aisha Mohammed of the Jalil Muntaqim Defense Committee trekked all the way from Oakland, Calif.

The head turner, however, was young songstress Mykia Jovan, who sojourned all the way up from New Orleans to perform. In addition to doing two moving original pieces, she brought everyone to their feet with a stirring a capella version of Billie Holiday’s classic “Strange Fruit.” Jovan’s performance was complemented by the Bronx-based spoken word artist Verbal Artisan, whose piece “Political Prisoner” got everyone going.

The evening’s special guests, Sekou Odinga and Lynne Stewart, who were released within weeks of each other, made their explosive impact.

Odinga, who endured some of the worse torture imaginable when he was captured on the way to doing over 33 years, related how important the support is to his comrades inside. He made it especially plain when he said “that the best way to honor these families is to bring our freedom fighters home.”

Stewart, defying advanced breast cancer, likened what was done to the movement to concussive bombs. “We cannot ever recover from the concussive damage done by COINTELPRO until we free our political prisoners,” she said.

Anchored in restorative justice, Dequi Kioni Sadiki, the evening’s hostess and key organizer, who is quietly taking up the mantles of both Herman Ferguson and Safiya Bukhari with her stellar commitment to this cause, pointed everybody’s eyes forward to critical work immediately ahead. Namely, that New York-held freedom fighters Herman Bell, Jalil Muntaqim, Robert “Seth” Hayes and Abdullah Majid were all up for parole again this year.

Wouldn’t that be a step in the right direction? Time will tell, as Malcolm was fond of saying.