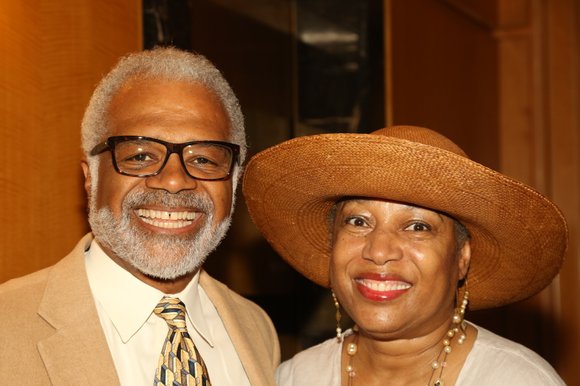 Proceeds from the benefit will fund upcoming works of New Federal Theatre and ensure continuation of its acting and playwriting workshops.

NFT honored Van Peebles and Nelson because of their exceptional commitment to African-American theater and film. Van Peebles’ memorable plays include Broadway’s “Ain’t Supposed to Die a Natural Death” and “Don’t Play Us Cheap” and NFT’s “Champeen” and “Waltz of the Stork Boogie,” along with many films, especially the award winning “Story of a Three Day Pass.” His American film directorial debut was “Watermelon Man,” starring Godfrey Cambridge and Estelle Parsons.

Nelson was honored for her years as artist-in-residence with impresario Joseph Papp at the New York Shakespeare Festival and for her work with NFT directing “Runners” by Ivey McCray and starring in the play “Gilbeau” by Clayton Riley. She notably appeared in Denzel Washington’s directorial debut, “Antwone Fisher.” Nelson also starred in Woodie King Jr.’s productions of “The Torture of Mother” and “Women of the Regent Hotel.”

NFT, founded by Woodie King Jr. in 1970, grew out of a theater program at Mobilization for Youth. This neighborhood-based professional theater was originally funded by the Henry Street Settlement, along with a small grant from the New York State Council on the Arts. The theater’s first season was launched in the basement of St. Augustine’s Church on Henry Street. In 1974, the construction of the Henry Street Settlement’s Louis Abrons Arts Center located at 466 Grand St. was completed. The physical plan included three theaters, rehearsal studios and modern stage equipment, all of which were made available to NFT. In March 1996, New Federal Theatre’s administrative offices returned to St. Augustine’s Church, but its production and training programs remained at Henry Street Settlement’s Abrons Arts Center.

Specializing in minority drama, NFT has brought the joy of the living stage to many minorities who live in the surrounding Lower East Side community and the greater Metropolitan area. NFT has provided emerging playwrights with the opportunity to have their works produced. It has brought minority actors, directors and designers to national attention and sponsored a variety of ethnic theater groups and events. The vocational training workshops prepare minority people for employment in theater and theater-related fields. Most importantly, NFT provides the multiethnic Lower East Side as well as New York metropolitan area audiences with first-rate theater relating to the interest of different cultural groups.