Shhh … the morgue is overflowing with bodies 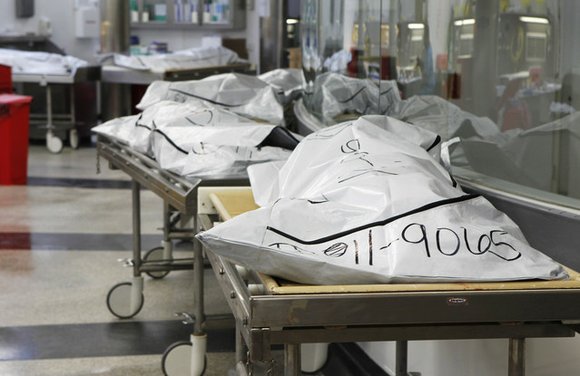 During the go-go ’80s and ’90s, when cities such as Miami and New York were plagued by drug-related violence, stories abounded about city morgues so overfilled that the medical examiner had to rent refrigerated trucks from Burger King to store the extra bodies. That was the era of drive-by shootings with machine guns and assault rifles, of homicides casually dumped by the roadside and detectives strained to the breaking point. Today, a similar, although much less publicized, public health crisis is also crowding the morgues—an unprecedented rise in opioid-related overdose deaths.

Maryland has been especially hard-hit. The number of unintentional drug- and alcohol-related deaths spiked by more than 50 percent (from 596 to 899) between 2008 and the third quarter of 2015, according to a study conducted by the Maryland Department of Health and Mental Hygiene. Over that time, the vast majority of overdose deaths—more than 85 percent—were caused by opioid overdoses, including heroin, pharmaceutical pain medications and fentanyl.

Although the issue is gaining traction in the public health community, it has gotten scant attention from the media. And that’s because these deaths are not taking place out on the street. There is no screeching ambulance siren or police tape, no incredulous neighbors awakened by automatic gunfire. And yet the scourge is just as deadly. Perhaps it is too close to home. It can happen to anyone, not just some homeless junkie down on his luck. We are perhaps less apt to look on with prurient fascination when it’s our neighbor, our coworker or our own daughter.

However, the questions remain: How did we ever get to this point, the point at which pain medications designed to relieve ailments became the very source of injury? Why are drugs so regulated and so intensely toxic that people cannot self-administer them without a prescription? Why do effective medications cost so much that people who’ve become addicted are forced to turn to the less costly but far more dangerous street drugs as alternatives?

Around the turn of the 20th century, if one had a toothache, one needed merely visit the local apothecary and pick up a bottle of medicine, which sometimes contained cocaine. In fact, cocaine was such a ubiquitous stimulant that it was the initial ingredient in Coca-Cola, which is named for the plant itself. It was considered no more dangerous or addictive than, say, sugar. In fact, a wide range of narcotics, from heroin to morphine, were considered miracle cures, and manufacturers loudly proclaimed that their products contained these substances. Tylenol containing codeine and cough suppressants containing Benzedrine were available without prescription to anyone who wanted them.

Some of these substances were even consumed recreationally, including coca-wine, which contained in excess of 30 grains of coca per ounce. One of the most popular variants of coca wine, Vin Mariani, came with the solid recommendation of more than “7,000 written endorsements from prominent physicians in Europe and America.” Other popular products contained opium derivatives, including heroin, which was developed by Bayer Corporation (which still markets aspirin) and marketed as a cough suppressant.

Over time, public health authorities began to realize that people were becoming dangerously dependent on such substances. Some were made completely illegal, and others were tightly controlled.