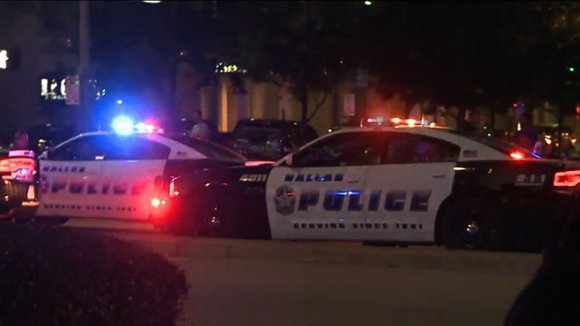 (CNN) -- Shooters killed five officers at a protest over police violence in downtown Dallas, sending screaming crowds scrambling for shelter and spurring an investigation into who was behind the ambush.

The deadly gunfire erupted in Dallas on Thursday night as videos showing two African-American men shot by police in Louisiana and Minnesota spurred protests and debate over police use of force across the country.

Authorities say three people are in custody and one suspect is dead. They haven't revealed details about the shooters or their motives.

Twelve officers were shot, and some of the injured officers are undergoing surgery, authorities said. The shooting was the deadliest single incident for U.S. law enforcement since September 11, 2001.

Two civilians were also wounded, according to Scott Goldstein, chief of policy and communications for the mayor.

Here's what we know:

-- Brown said it's unclear how many suspects were involved, but three people are in custody.

-- Police negotiated and exchanged gunfire with a suspect for hours at a parking garage in downtown Dallas. That suspect is dead, a law enforcement official told CNN. The official did not say how the suspect died.

-- "The suspect told our negotiators that the end is coming," Brown said. The suspect at the garage also told negotiators more officers were going to get hurt, and that bombs had been planted all over downtown.

-- Two of the shooters were snipers who fired "ambush-style" from an "elevated position," Brown said.

-- Officers killed include one officer with DART, the Dallas Area Rapid Transit agency, which operates buses and commuter rail in the city and surrounding suburbs.

-- DART identified the officer killed as Brent Thompson, 43. He joined the transit agency in 2009, and was its first officer killed in the line of duty, DART tweeted.

-- Witness Ismael Dejesus said he filmed a shooter from his hotel balcony about 50 yards away. He described the gunman as carrying a weapon with a "pretty big magazine."

-- President Barack Obama, who is in Warsaw, Poland, said his team is keeping him updated. "We still don't know all the facts, we do know there's been a vicious, calculated and despicable act on law enforcement," Obama said. "I believe I speak for every American when I say we are horrified."