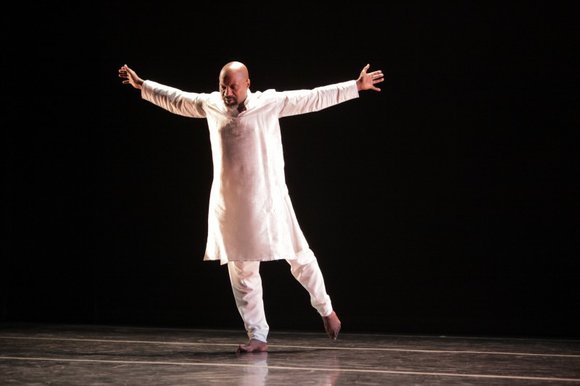 The dancers who make up Ronald K. Brown/Evidence, A Dance Company—Brittany Ballentine, Arcell Cabuag, Shayla Caldwell, Annique Roberts, Keon Thoulouis and Clarice Young—are true vessels for Brown’s recognized vocabulary. For their New York season at the Joyce Theater (June 28 to July 3), the company presented two programs: Program A offered the return of “Torch” (2013) and “Highlife” (2001), plus “For You” (2000), a solo generally performed by Brown, and the world premiere of “She Is Here.” Program B included “Better Days” and “Gatekeepers,” both created in 1998, and “Four Corners,” originally commissioned for the Alvin Ailey American Dance Theater in 2014.

When the entire company is on stage, as in “Torch,” a work that mines Brown’s spiritual focus, the Brown-stamp in bridging movement and root source is realized. (See AmNews, May 29, 2014.) Especially wonderful is seeing Roberts with Brown. They have an ever-pleasing relationship that is enlivened when they share the same space. They are mentor/mentee. At one point when Brown and Roberts face each other, at the beginning and then at the end—Roberts’ sway back stance alongside Brown’s patience stillness speak volumes.

The other group work, “Highlife” (2001), described as “… a dance that builds upon images of migration and change,” set to music by Fela Kuti, Wunmi and others, is episodic. Here Brown imparts African-American history through dance. From the slow-dragging feet of slave women, hand-clapping and foot-stomping church goers, luggage-carrying Pullman porters, to the finger-pointing juke joint dancers and then some, the dancers and the work are intoxicating. In fact, the audience exploded in applause when, Brown, softly lit in one corner, begins a meditative sequence of low to the ground moves accompanied by Kuti’s propulsive sounds.

Two solo works, “For You” and “She Is Here,” fell between “Torch” and “Highlife.” A frequent guest choreographer for AAADT, Brown sometimes bring guest performers from the company for the Evidence season. This year, former AAADT principle Kirven Douthit-Boyd offered a warm rendition of “For You.” The solo, “She Is Here,” shared by Roberts and Young, was created to celebrate “… self-determination and perseverance … [showcase] … Evidence women, honor the legacy of mothers and teachers who have inspired living with integrity.” Roberts danced this evening and she was breathtaking. There is no fuss. Costume designer Keiko Voltaire’s sinuous dress, a bare stage and Roberts are all there is. The work is contemplative, the feel is smooth, the pulse is tempered by Latin-jazz bassist Anthony Gonzalez’ sounds and Roberts glides through every repeating swirl, welcoming arms and lingering balance. “She Is Here” doesn’t really build, but the tone is sure. Brown and company score yet again.