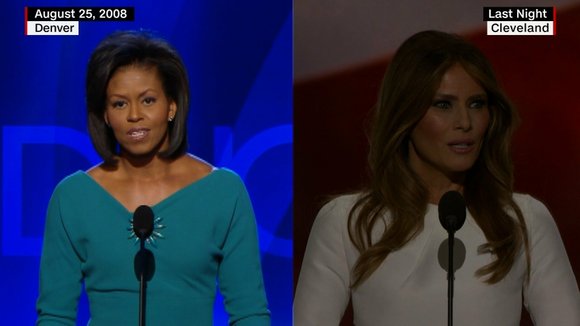 Side-by-side comparisons of the transcripts show the text in Trump's address following, nearly to the word, the first lady's own from the first night of the Democratic convention in Denver nearly eight years ago. CNN

"To think that she would do something like that knowing how scrutinized her speech was going to be last night is just really absurd," Trump's campaign chairman Paul Manafort told CNN's Chris Cuomo on "New Day."

At least one passage in Trump's speech Monday night plagiarized from Obama's address to the Democratic National Convention in 2008.

Side-by-side comparisons of the transcripts show the text in Trump's address following, nearly to the word, the would-be future first lady's own from the first night of the Democratic convention in Denver nearly eight years ago.

Republican National Committee chairman Reince Priebus said at a Bloomberg Politics event Tuesday morning he'd "probably" fire whoever was responsible for including plagiarized quotes, though he added, "It all kinda depends on the circumstances and how these things are written."

Manafort said on "New Day" the words Melania used were not "cribbed" but are common words.

The East Wing and White House declined to comment on the plagiarism story Tuesday.

Manafort said attacks on Trump's speech are due to Hillary Clinton, the presumptive Democratic nominee, being "threatened" by Trump.

"This is once again an example of when a woman threatens Hillary Clinton, she seeks out to demean her and take her down. It's not going to work," he said.

The controversy quickly overshadowed the speech, which was to have been her introduction to voters. It focused on her immigration to the US and her love for her husband.

The Trump campaign released a statement on the speech after the similarities were uncovered, but the statement did not mention the plagiarism charge.

"In writing her beautiful speech, Melania's team of writers took notes on her life's inspirations, and in some instances included fragments that reflected her own thinking. Melania's immigrant experience and love for America shone through in her speech, which made it such a success," according to Jason Miller, the senior communications adviser.

Earlier in the day, Melania Trump told NBC's Matt Lauer: "I read once over it, that's all, because I wrote it ... with (as) little help as possible."

Here is Trump, on Monday:

"From a young age, my parents impressed on me the values that you work hard for what you want in life, that your word is your bond and you do what you say and keep your promise, that you treat people with respect. They taught and showed me values and morals in their daily lives. That is a lesson that I continue to pass along to our son," Trump said.