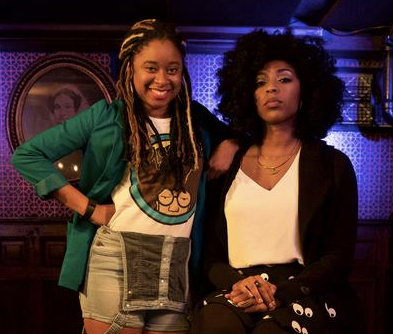 Two new voices emerged in the podcast world in early spring—launching at No. 1 on iTunes—and they belonged to two young Black women with zero qualms about talking about anything, especially not the hilarious differences between Black and white people.

Phoebe Robinson and Jessica Williams are the creative minds behind the widely streamed and highly praised podcast “2 Dope Queens.” Their impact is twofold. They have reached beyond race, not necessarily transcending it, which is often viewed as denying one’s Blackness—and they’re certainly not doing that—and gender barriers in a field where the most identifiable presence is overwhelmingly white and male.

Having Robinson’s and Williams’ voices there to break up the monotony is welcomed, and WNYC is working hard to keep more diverse perspectives flowing through our speakers.

“It’s changed the sound of podcasting in a really profound way,” said Paula Szuchman, WNYC’s vice president of On-Demand Content. “It’s really funny, but you also hear people that you wouldn’t hear otherwise, and you’re exposed to experiences and stories that you just don’t really get anywhere else. Millions of people get to experience that in their earbuds.”

Earlier this month, WNYC hosted its second annual women’s podcast festival, “Werk It!” to discuss the importance of women in the budding new medium and to showcase some of the women who have contributed to changing the images associated with audio and digital media. This year’s festival also served as a live taping of “2 Dope Queens.” “Werk It!” is the brainchild of Szuchman and Laura Walker, the president and CEO of New York Public Radio, who shared that last year, getting people to come to the festival was just above begging, but this year, they didn’t even have enough seats for the 700 applicants who wanted to come.

During the first day of the festival, it was announced that WNYC would be launching a new podcast July 12, in the style of a talk show, called “Sooo Many White Guys.”

The new podcast will be hosted by Robinson, who describe the premise of the podcast as her sitting down and talking to really influential people who are not represented in mainstream media. Her guests will include people of color, women and members of the LGBTQ community, talking about their lives and experiences in their careers. She’s already done interviews with actress Nia Long, transgender advocate and author Janet Mock and comedienne Samantha Bee. At the end of each season there will be one surprise white male guest, explained Robinson.

“They need to know what it feels like to be the token,” said Robinson, laughing. “This is their diversity hire.”

Robinson came up with the idea while doing stand-up at a comedy festival in Los Angeles in January. She put together a comedy show called “Sooo Many White Guys,” featuring everyone but white men, because the stand-up comedy world is already dominated by them. When producers at WNYC opened up the discussion to launch another podcast, after seeing the success of “2 Dope Queens,” Robinson thought that her idea would translate well into a talk show format.

For more information on Robinson’s new podcast and to continue listening to her and Williams on “2 Dope Queens,” please visit WNYC.org.