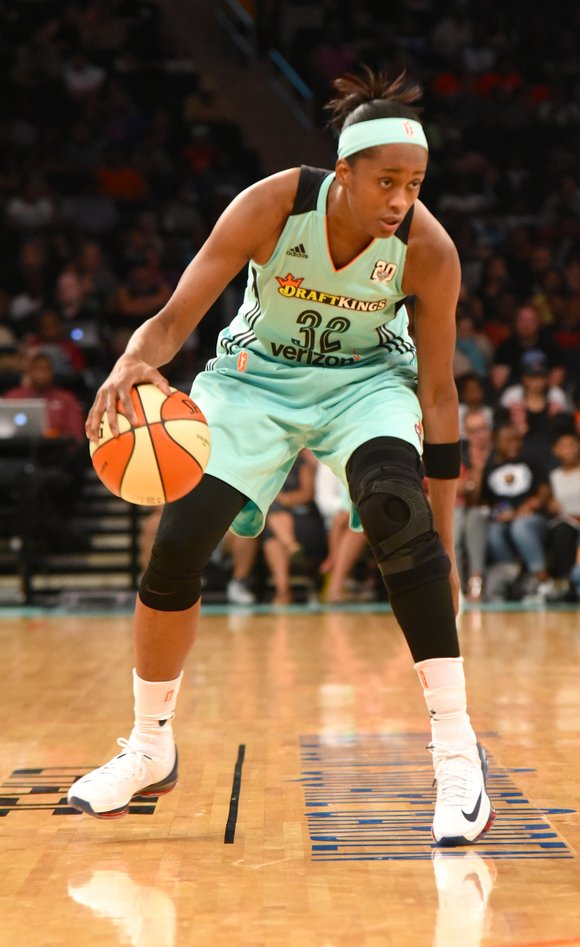 As the WNBA heads into its Olympic break, the New York Liberty continue to dominate the Eastern Conference. Sunday afternoon, the Liberty pulled out a hard-fought, physical and close game against the Connecticut Sun, 83-76. Each time the Liberty built up a lead, the Sun countered, even pulling ahead a couple of times.

“We didn’t have the energy tonight necessary to really give us a solid game,” said coach Bill Laimbeer. “I thought it was a gutsy win by us. We hung tough and hung tough and found a way to win.”

In the end, the Liberty prevailed, thanks to its talented and tenacious bench, as well as the veteran presence of forward Swin Cash, who led the Liberty in scoring with 16 points. “She turned back the clock,” said Laimbeer.

“It felt good to feel like I was in a rhythm offensively and defensively,” said Cash, who is retiring after this season. “It felt really good out there. We knew we had to get back in transition and run with [the Sun]. I’ve played that style my whole career, so I loved it.”

The bench was also vital in the win, with Kiah Stokes, Shavonte Zellous and Brittany Boyd all providing valuable points as well as rebounds, assists and steals. Tina Charles credited Zellous with being a calming presence in Sunday’s game.

“Coming into half-time, she definitely drilled it into the first unit, saying we can’t be sluggish because it’s a snowball effect on them when she comes in with the second unit,” said Charles. “[The bench] knows how key it is to give us a break.”

“It’s been a tough stretch for us,” said Zellous. “What I try to focus on is when that second unit is coming in, since I’m the vet, is to lead them anyway I can—whether it’s offensively or defensively. Whenever I can be in there and as a collective unit just get everybody together and show them what we’re focusing on and what we need to do, everything is going to fall into place.”

The Liberty have an 11 a.m. game today against the Indiana Fever, and then are on break until the end of August. Charles will join the U.S. Olympic Team, which takes on Australia in an exhibition game at Madison Square Garden July 31.